Tula Goenka, center, with her daughter, Ranya Shannon, who was 9 when Goenka was diagnosed with breast cancer, standing next to Cindy Bell‘s portrait of Goenka at the “Look Now” exhibition. (This and the following photos taken at the opening of the exhibit are by Susan Kahn; the Look Now" exhibition portraits shown are by Cindy Bell)

“I realized I could use my experience, and my body, to say something about breast cancer. All of us can use our experiences to advocate for others,” she explains.

Goenka, a professor at Syracuse University, organized a photography and video exhibition showcasing breast cancer survivors this past fall at the Point of Contact Gallery in Syracuse.  Prints made by photographer and breast cancer survivor Cindy Bell featured 42 women and two men, 25 of whom were shown in clothed portraits accompanied by photos of their bare breasts altered by surgery. The remaining 19 chose anonymity, posing only for photos of their chests.

Inspiration for the project came from a poster Goenka saw at SU‘s Newhouse School in 2009, three years after she was diagnosed with breast cancer. The poster advertised a talk by Playboy‘s former CEO Christie Hefner, who spoke about transforming the domestic publishing-based business into a global multimedia and lifestyle company. Goenka wondered whether the magazine known for photos of naked women would ever put on its pages a woman after breast cancer surgery.

Goenka, whose treatment included two lumpectomies, chemotherapy, a double mastectomy and reconstructive surgery, thought it was time for a project championing breast cancer survivors. She met with colleagues and cancer survivors to discuss cultural ideals of beauty, breasts as sources of nourishment and symbols of femininity, and the significance of breasts bearing the battle scars of cancer treatment. The result was a project that included not just the photography exhibit and documentary video, but a website (looknowproject.org) and theater performance, now in process. It‘s called “Look Now: Facing Breast Cancer.”

Here are stories from five participants.

“It was the 1970s, and a paternalistic environment,” explains Lois Schaffer, who had lymph nodes removed along with her mastectomy.  “I was annoyed with male surgeons who just didn‘t get what breast cancer patients were going through.”

Then Schaffer met Patricia Numann, MD, surgeon and founder of Upstate‘s Breast Care Center, which is named in her honor. “Dr. Numann helped me put what I was feeling into words.  I adore her.”

Through Numann, Schaffer got involved with Reach to Recovery and Cancersurmount, programs in which survivors provide support to others with cancer. Schaffer remained Numann‘s patient for many years.

Schaffer has nothing but praise for two male physicians she encountered in the 1970s: radiologist Robert Sagerman, MD, who insisted she have radiation treatments, and Howard Weinberger, MD, who ran a program in which Schaffer and other survivors taught Upstate medical students about their experiences with cancer.

Looking back 45 years, how did breast cancer affect Schaffer? “I became active in the women‘s movement. I got a master‘s degree in adult education. I ran a program for displaced homemakers,” says Schaffer. ”I wouldn‘t wish cancer on anyone, but it gave me strength.”

Angels and a little pink bag

Patti Muller had just moved to Central New York when she was diagnosed with breast cancer shortly after Thanksgiving. Alone in a new area with a new job and two young children, Muller was introduced to Carol and Beth Baldwin, founders of the breast cancer research fund that bears their name.  “Carol and Beth stayed with me throughout my surgery and first chemotherapy treatment,” remembers Muller. “Beth was by my side dozens of times throughout treatment.”

Under the direction of oncologist Sheila Lemke, MD, Muller had surgery, chemotherapy and radiation treatments at Upstate. And — as a woman of Ashkenazi Jewish descent, which is a risk factor — Muller had genetic testing at Upstate to see if she carries a breast cancer gene. She does not.

How does Muller look back at breast cancer? “I was given a pink gift bag at my first appointment. I was busy thinking, ‘I don‘t want to be part of the breast cancer club,‘ so I never looked in the bag until much later,” she remembers. “It was filled with useful information and health care products that I needed. I could have saved myself a lot of work if I‘d just opened the bag.”

Here for her daughters

Three years ago, after a day teaching preschoolers, Fay was unconcerned as she drove to her annual mammogram appointment. A 3-D mammogram looked clean.  But because Fay‘s breast tissue is dense, doctors ordered a follow-up ultrasound. It identified something.

Fay describes the first 12 weeks of chemotherapy as the toughest part of treatment. She lost her hair, had little energy and felt sick much of the time. She had to take a leave from teaching because chemotherapy depressed her immune system, and close contact with children and childhood diseases would have been dangerous.

“Choosing to have a bilateral mastectomy was easy,” Fay explains. “I wanted to do whatever I needed to get better.”

The second round of chemotherapy was much easier, and Fay was able to return to teaching part time.

Now, she has appointments with Greco and Lee twice a year and is back teaching full time.

How has breast cancer affected Fay? “Cancer reminds me to be grateful. Because of all the care I got, I‘ll see my daughters, Evelyn and Julia, graduate from high school,” says Fay. “I‘m watching them develop into powerful women. I‘m so glad to be here.”

Fay was one of the 19 participants who chose to have only an unidentified photo of her bare chest in the exhibition.

Appreciative of a new life

Anju Varshney had just had a mammogram that was “fine” when she woke up and found a quarter-sized lump in her left breast. She shrieked and called her husband, Pramod.

Varshney met with surgeon Mary Ellen Greco, MD, on a Thursday and had a lumpectomy the following day. On Tuesday, Varshney learned the tumor was malignant and aggressive. The next day she met with Upstate oncologist Sheila Lemke, MD, who started chemotherapy immediately. Greco performed a bilateral mastectomy and removed lymph nodes, some of which proved cancerous. Varshney continues to have annual appointments with Greco at Upstate‘s Community campus.

“I trusted the people right here,” says Varshney. “Staying in Syracuse for treatment was the best decision I could have made.”

What does Varshney remember about breast cancer? “Tula (Goenka, creator of “Look Now”) and I went through treatment together. We sat near each other and chatted while we had chemotherapy infusions at Upstate.”

How has breast cancer changed Varshney? “Cancer has given me a new life. I have faith in the doctors, in the people around me, and in God. My motto is, ‘Life happens. Keep smiling.‘”

Jeanine Capone was 38 when she stood in front of a mirror and saw that her left nipple looked strange.

A mammogram didn‘t show anything worrisome, but a sonogram found a lump that was thought to be a cyst. A needle biopsy was inconclusive. It took a core biopsy to identify cancer. Capone had the lump removed surgically, and she had to find an oncologist.

She remembers walking into Upstate‘s outpatient oncology center (which today is the Upstate Cancer Center.) “I‘ve got breast cancer, and I don‘t know what to do,” she remembers saying to a nurse. The nurse showed her around and talked with her at length.

Capone worried about what to say to her sons, who were 8 and 9 at the time. “You tell them the truth,” she remembers the nurse telling her, “and you answer their questions.”

Two days later, Capone received a gift from that Upstate nurse: two books on how to talk with children about cancer. Capone was referred to Upstate oncologist Jonathan Wright, MD, and together they planned her post-surgery treatment:  chemotherapy and radiation, followed by 10 years of estrogen-suppressant medication.

Growing up, Capone‘s sons, Bradley and Bryan, did multiple school projects on breast cancer. In high school, they surprised her by asking to see her surgical scars. When they turned 18, Bradley and Bryan got pink ribbon tattoos on their chests, in the same location as their mother‘s scars from breast cancer surgery. Photos of their tattoos are part of the “Look Now” exhibition at looknowproject.org.

This article appears in the winter 2019 issue of Cancer Care magazine. 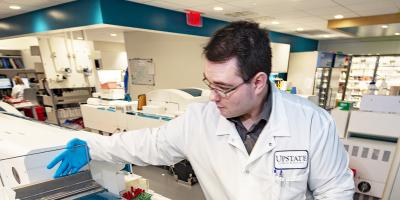 Up close: A peek at laboratory analysis 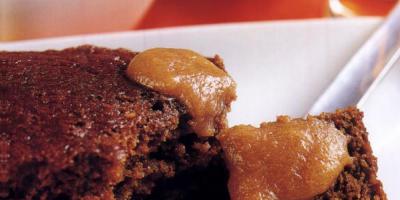 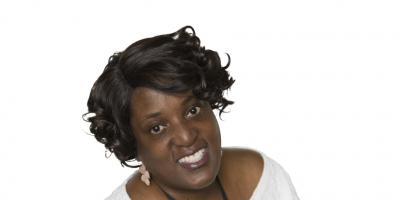 Patients are grateful for social workers 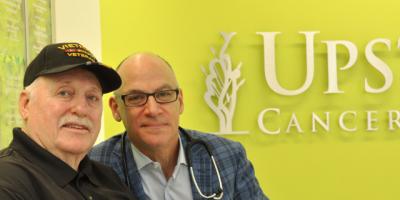 He chose radiation treatment for his prostate cancer