A makeshift "cemetery" at Onondaga Lake Park was set up in August by a surviving family members who lost someone to a drug overdose. Each tombstone represents someone who died from a drug overdose. (PHOTO BY RICK MORIARTY/SYRACUSE MEDIA GROUP)

The number of Americans dying from gun violence or drug overdoses now surpasses the number of motor vehicle fatalities in the United States. The public health crises of gun violence and drug addiction are also felt in Central New York.

The rate of motor vehicle fatalities decreased 59 percent from 1969 to 2012. If that trend continues, deaths from gun violence will surpass those from motor vehicles nationally within a few years. Already 21 states have higher death rates due to firearms than motor vehicle deaths, says Margaret Formica, PhD, from Upstate‘s department of public health and preventive medicine.

Syracuse has an annual rate of six shooting victims per 100,000 people, which is 1 ¼ times higher than the national rate, Formica says.

She says national data shows more than 32,000 deaths due to firearms, and more than 67,000 injuries from firearms each year, by far the highest numbers among industrialized nations. What may appear to be good news -- a plateau in the rate of gun deaths since the year 2000 – actually reveals a  shortfall, Formica says. “We‘re not doing a very good job of preventing gun deaths.”

Opioid drugs such as morphine and oxycodone are used to treat moderate to severe pain, and they work well for a day or two. The drugs are not intended for use long term, but some patients, in chronic pain, take the drugs longer than is safe and become addicted.

As their prescriptions run out, patients seek alternatives. Heroin is inexpensive and available on the street. Eggleston says its addiction rates have doubled over the last decade in the United States. He says the high from heroin is different than from other opioids. Nothing else feels the same, which makes heroin highly addictive.

“Addiction doesn‘t discriminate,” he says. “It doesn‘t matter your socioeconomic status, your gender, where you live, what you do for work,” he says. “We all know someone, or are related to someone or love someone who is suffering from addiction.” ### 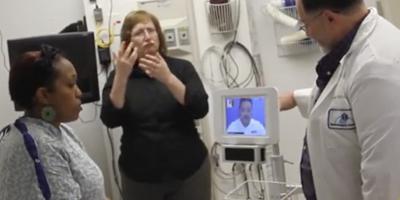 Rolling iPads and sign language are part of her job

12 things you might not know about the United States military