Toni Lindgren on the motorcycle she and her husband bought for her after her chemotherapy treatments for lung cancer. This winter, she is riding it along the eastern coast of Florida. (PHOTO BY SUSAN KAHN)

As a retired police officer, Toni Lindgren knows how to deal with problems. So, when a physician at Fort Drum said, “I think it‘s cancer,” Lindgren said, “I‘m going to Upstate. I want the doctors who do cancer all day, every day.”

Last March, Lindgren, 58, of Carthage saw her primary care physician because she was concerned that her stuffy nose and occasionally bloody cough might be symptoms of an infection that her elderly mother could catch.

“Just to be on the safe side, let's do a chest X-ray” said Lindgren‘s primary care doctor. She and her husband receive care though Fort Drum because of his military service.

That evening, the doctor called her at home. He made sure she wasn't alone. Her husband, Dale, was with her. “There‘s a large mass on the lower lobe of your right lung," the doctor told them. "Don‘t wait until Monday. Get a CT scan at Carthage Hospital now.”

The CT scan confirmed a tumor in her lung, and Lindgren's doctor gave her a referral to the Upstate Cancer Center.

At Upstate, Birendra Sah, MD, inserted a scope through her mouth so he could view her lungs, trachea and surrounding area with the scope‘s camera. That procedure, called a bronchoscopy, showed lung squamous cell carcinoma in a lymph node. It was followed by a PET scan, which illuminated the cancerous tumor and a number of concerning spots near her trachea.

“I lit up like a Christmas tree,” described Lindgren, shaking her head.

Since the PET scan made it appear that cancer had spread from the lung to the lymph nodes, the initial plan was to treat Lindgren with chemotherapy and radiation.

Lindgren‘s reaction was, “This thing‘s growing every day. I want surgery to get it out!”

The multidisciplinary thoracic oncology team at Upstate met to discuss Lindgren‘s case and, with her involvement, decided that a second biopsy, called a mediastinoscopy, was warranted to further examine the middle of her chest, between the lungs.

The results were encouraging. Surgeons Jason Wallen, MD, and Robert Dunton, MD, biopsied multiple lymph nodes, and none  were cancerous. Most of the areas illuminated by the PET scan were “false positives,” meaning noncancerous. Now, surgery was an option.

On May 3, Lindgren had minimally invasive surgery to remove the lower lobe of her right lung. She was released from the hospital four days later, on her husband‘s 60th birthday.

The final pathology report showed that only two lymph nodes were cancerous.

Oncologist Stephen Graziano, MD, recommended 12 weeks of chemotherapy. Between June and August, Lindgren and her husband rose at 5 a.m. to drive from Carthage to Syracuse for her treatments.

Lindgren tolerated the chemotherapy well. She had just a couple of bouts of nausea and never lost her hair. However, a few weeks into treatment, Lindgren faced another blow: While she was being treated at Upstate, her mother died in another hospital in another city.

“I couldn‘t visit Mom because my resistance was low because of the chemo,” explained Lindgren. “But we were able to video chat. Mom told me she‘d decided to stop her treatment for a lung condition. Now, she and my dad, who died six years ago, are angels in heaven making sure I‘m OK.”

One tough day at the hospital, Lindgren‘s husband mentioned that they ought to look at a white Harley-Davidson motorcycle that was for sale in Utica. For Lindgren, it was love at first sight. She had long dreamed of riding a Harley on Highway A1A in Florida with her husband.

With surgery and chemotherapy completed, Lindgren and her husband were ready to snowbird. Lindgren‘s CT scan in September and chest X-ray in November were clear, paving the way for their extended trip. Shortly after her birthday on Nov. 14, the couple left Carthage for St. Augustine, Fla. She will see doctors there, and then she has an appointment with Graziano in April at Upstate.

The couple is grateful.

“When I got the news of lung cancer last spring,” admits Lindgren, “I didn‘t think I‘d live to see my birthday." 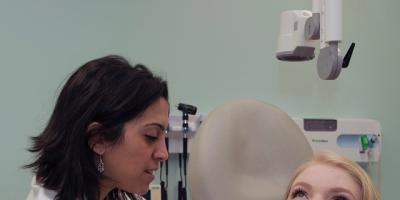