One quarter of the babies born in Onondaga County have been exposed to an opioid drug of some sort in the womb, making for one of the highest rates of newborn drug exposure in New York state.

That doesn‘t mean women in Central New York are more prone to drug use. Neonatologist Michelle Bode, MD, an assistant professor of pediatrics at Upstate,  explains that “in New York City they don‘t have a problem because they don‘t test.”

Pediatricians who serve the three Syracuse hospitals with maternity care screen for drug use in the same way, Bode says, “so we‘ve got some cohesiveness that isn‘t necessarily found in other areas of the state.” Upstate University and Crouse hospitals and St. Joseph‘s Hospital Health Center deliver most of the babies from Onondaga and 14 surrounding counties.

In 2001, 5 percent of newborns were exposed to an opioid during pregnancy. Today it‘s up to 25 percent. The majority of exposures come from prescription opioids such as hydrocodone or oxycodone, but the number of babies exposed to illicit opioids such as heroin has increased, too.

Bode says data from birth certificates for babies living along the Interstate 81 corridor shows 2.1 percent were affected by illicit drug use in 2006. Almost three times as many – 5.9 percent – were affected in 2015.

Whether exposed to legal or illegal substances, the babies are born with what is called neonatal abstinence syndrome. “These infants do not have a normal newborn experience,” Bode says.

Often free of symptoms at birth, the babies within the first week become irritable and jittery, with a shrill cry. They don‘t feed well or sleep well, and they have diarrhea. Hospitalization may last three days or more than three weeks as they go through withdrawal, depending on the substance they were exposed to and for how long.

Long-term consequences can include birth defects, problems with development and behavior and a greater risk for sudden infant death syndrome. If the mother gets help for her addiction, and if she brings the baby into a loving and stable home, there may be no lasting effects. “The environment the child is raised in will determine their outcome,” Bode says.

She points out that mothers-to-be who admit to opioid use during prenatal visits can receive expedited referrals to addiction treatment services in Central New York.

Studies show that pregnancy can be a window of opportunity to get women into treatment. Ask 100 pregnant women how important their baby‘s health is to them, and, Bode says, fewer than 1 percent will say it is not important. If health care providers explain how halting opioid use can help the woman have a healthy baby, she is likely to be receptive to addiction treatment. And, Bode notes, women have a slightly higher success rate for treatment when they are pregnant.

This article appears in the fall 2016 issue of Upstate Health magazine. Click here for a radio interview/podcast in which Bode discusses opioid use during pregnancy and its effects on newborns.
Published on Tuesday, September 20, 2016 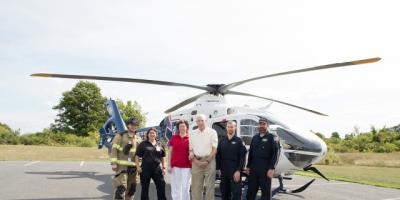 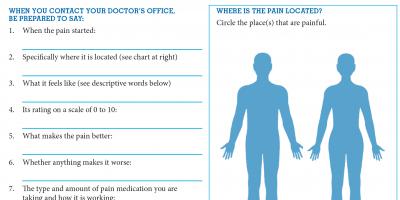 A way to help you communicate your pain to your doctor