An overview of the pancreas. A diagram of a pancreatic islet appears at the end of this article. (ILLUSTRATIONS BY DAN CAMERON)

Upstate doctors are now offering a pancreas transplant option for some patients with diabetes mellitus, the most common cause of kidney failure.

“Rather than waiting until the kidney fails, you may want to be proactive and go for a pancreas transplant, specifically if you have brittle, or labile, diabetes,” says Rainer Gruessner, MD, Upstate‘s transplant chief and professor of surgery. He and his team are offering these transplant surgeries -- separately or combined with kidney transplants.

In the future, Gruessner‘s team may also offer transplants of just the clusters of cells that produce insulin, called pancreatic islets.

Ruth Weinstock, MD, PhD, Upstate‘s division chief of endocrinology, diabetes and metabolism, says, “The treatments for diabetes are getting better and better, but they are still imperfect.”

Type 1 diabetes, in which the body‘s immune system destroys insulin-producing cells, requires multiple insulin injections daily or insulin pump therapy along with frequent monitoring of blood sugar. Many people with long-standing type 1 diabetes, despite vigilance in glucose monitoring and administering their insulin, can no longer feel symptoms of low blood sugar, called hypoglycemia unawareness. They can have unpredictable and life-threatening episodes of low blood sugar, called severe hypoglycemia, and wide fluctuations in blood sugar levels.

Progress has been made in the development of insulin pump therapy and continuous glucose monitoring, components needed for the eventual development of an “artificial pancreas.” They are a great step forward, says Weinstock, but they are not a cure.

Only a properly functioning pancreas or pancreatic islets would be a real cure.

Gruessner says a pancreas transplant can improve the lives of some patients with diabetes and also halt or reverse complications such as diabetic changes in the eyes and kidneys. Those who may be considered for pancreas transplants have particularly hard-to-control type 1 diabetes, known as “brittle diabetes.” They experience frequent and extreme swings in blood sugar, which increase their risk of heart attack, stroke, kidney failure, blindness, circulatory disorders and death.

Mark Laftavi, MD (left). and Oleh Pankewycz, MD (right), were recruited by Gruessner to be the surgical director and medical director, respectively, of Upstate University Hospital's pancreas transplant program. The two men previously directed the transplant program at the Erie County Medical Center, the teaching hospital for the University at Buffalo Jacobs School of Medicine. (PHOTO BY DEBORAH REXINE).

Some people with diabetes who develop irreversible kidney damage may need a kidney transplant. They may be candidates for a pancreas transplant at the same time.

For pancreas transplants, the donor organ comes from a person who has died. The pancreas is added to the recipient‘s body, and the recipient retains his or her original pancreas, which continues to produce digestive enzymes. The new pancreas immediately begins producing insulin.

He says 85 percent of transplanted pancreases function as they are supposed to. Patients no longer have to check their blood sugar levels multiple times a day or inject themselves with insulin. They are able to eat what they like. But, they must take anti-rejection medication.

Transplants of the pancreatic islets, the clusters of cells that produce insulin, show promise in treating people with severe diabetes and those with chronic pancreatitis and intractable pain.

Research published in April in the journal Diabetes Care shows that islet transplantation “offers a potentially lifesaving treatment that in the majority of cases eliminates severe hypoglycemic events while conferring excellent control of blood sugar,” says Anthony Fauci, MD. He is the director of the National Institute of Allergy and Infectious Diseases.

In the United States, islet transplants are currently available only through clinical trials. Research is underway to encapsulate the islets, so they will not be recognized by the recipient‘s body as foreign. The hope is that in the future, islets will be able to be implanted without the patient having to take anti-rejection drugs, which suppress the immune system.

Pancreas care a specialty at Upstate

Upstate is one of 37 National Pancreas Foundation designated Centers for the Care and Treatment of Pancreas Diseases, and the only one in New York outside of New York City.

The designation, earned in March, means Upstate has all the services, health care professionals and programs necessary to provide multidisciplinary treatment for patients with diseases of the pancreas, including pancreatitis, diabetes and pancreatic cancer. Designated centers also play a role in advancing research and leading the way for heightened awareness of pancreatitis and related conditions.

“It‘s a seal of approval for how we care for patients with pancreatitis,” says Nuri Ozden, MD, an interventional gastroenterologist at Upstate and the medical director of the foundation‘s New York State chapter.

In addition, Upstate provides the Liver, Gallbladder and Pancreas Center. Established in 1994, the center provides comprehensive evaluation of patients with both malignant and nonmalignant diseases involving these organs.

Pancreatic islets, such as seen here, produce insulin. Islet transplantation is being studied for possible treatment of severe diabetes and chronic pancreatitis but is currently only available in clinical trials in the U.S. 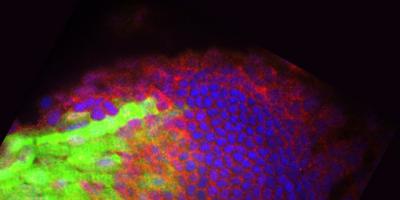 Science is art: a glimpse into the mysteries of regeneration