Upstate students Gabriella Izzo and Joe DeMari flank Connor Licamele at Paige's Butterfly Run. Izzo and DeMari are among the 17 first- and second-year medical and public health students chosen this year to participate in the Peds Pals program.

The program called “Peds Pals” matches mostly first- and second-year medical students and public health students with pediatric patients who have cancer, sickle cell disease or another chronic illness. Interested students are selected through an application and interview process.

Students agree to meet with their pals at least once a week in get-togethers that are a mix of academic tutoring and recreation. Many meet more often. Education specialist Kristi Griffin tells the students they may never realize the impact their involvement has on a little pal.

Some students accompany Griffin when she meets with their pal‘s teachers, so they can learn about specific academic needs. Some attend medical appointments. Others accompany their pals on fun excursions. And they meet their family members during bimonthly family events.

“My first year I worked with a child who is now in treatment,” said Heli Shah, now a third-year medical student. “I went to her appointments with her and became a source of comfort. I don‘t think I‘ll ever forget the image of how much pain the treatments cause.”

Shah was paired with Brianna Belair this past year. Brianna, 13, is in remission after treatment for a brain tumor that was discovered when she was in kindergarten. Shah often played a board game with Brianna that was designed to help improve memory, and she said she saw improvement in her memory and math skills. Brianna‘s mother, Ann Belair,  confirmed that her academics improved.

Brianna enjoys arts and crafts with Shah and second-year medical student Hannah Carroll. “But I especially like it when they take me out for ice cream,” she said.

Carroll, whose youngest sister is Brianna‘s age, said she likes that the Peds Pals program is so personal. “You meet one-on-one and build a relationship. You get to know them.”

While the students serve as mentors to the pals, the relationships that develop provide a glimpse of what a doctor-patient relationship will be like. Time spent with a pal can be fulfilling, but when a pal suffers a medical setback, students can feel the devastation as well.

Griffin tells the students to remember the magnet on her desk. “You never know when you are making a memory,” it says.

“I truly believe that,” she said. “There may be struggles and heartaches along the way, but what they are doing is life-changing.”

Money raised from Paige‘s Butterfly Run helps pay for academic resources, tutoring supplies, iPads, educational games and related materials for the “Peds Pals” program. Paige‘s has donated more than $2 million to Upstate since the event began in 1996. The event, which is sponsored by the Upstate Foundation, takes place June 4 next year in downtown Syracuse.

This article appears in the fall 2015 issue of Cancer Care magazine. 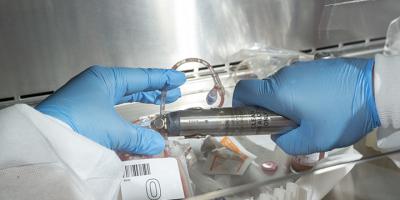 Up Close: A quick look at bone marrow transplant

Why some cancer programs open themselves up to assessment

10 musts for cancer patients: What to consider after diagnosis