Upstate Medical University presented 16  awards at its fall convocation Sept. 16. The SUNY Chancellor's Award for Excellence in Faculty Service was given to Vincent Frechette, MD. Below is his biography, as it appears in the convocation program.

Dr. Vincent Frechette has made a positive impact on the lives of thousands of students, residents, faculty members and patients. Dedicated to serving Upstate and our community, his teaching, practice and philanthropy are held in the highest esteem by patients, colleagues and those he trains. Despite his rigorous and crowded daily agenda, his compassion and composed demeanor is legendary.

Dr. Frechette first joined Upstate as a medical student in 1987 and continued on as a medical resident and chief resident before becoming an associate professor in 2002. That same year he became director of Educational Programs for the Department of Medicine Residency. Under his tenure as director, the residency maintained a 100 percent pass rate. “Not only an effective leader and advocate for the students and house staff in his seven years in this role, he was also their workplace ‘dad,‘” said a nominator.

In 2007, he was appointed to division chief of the General Medicine Division, overseeing the largest division of Medicine, with 35 paid faculty. In addition, he sees patients at University Internists. As a division chief, he has facilitated the development of the Hospitalist Program and the transition of coverage extending to the Community Campus. He has developed the nocturnist program, which provides 24-hour, in-house attending internal medicine care and residency supervision at Upstate. “The star I first saw in 1995 continues to shine just as bright,” said another nominator.

He teaches for the Family Medicine Rural Medical (R-Med) Program, traveling to various rural locations throughout the state. “He has shaped me into the physician I am today,” a nominator said. He has also lectured at the Manlius Senior Centre and community lectures and has held a Community Education Night. He has also been a public television physician consultant. “He has inspired countless individuals by his professionalism, work ethic and passion for medicine,” one said.

Dr. Frechette and his wife, Didi, established Lukie‘s SOUL Foundation in 2003, one year after the death of their 4-year-old boy, Lukie, from hepatoblastoma, a rare pediatric liver cancer. That same year, the Frechettes began hosting the Lukie‘s Holes Fore Hope golf tournament in support of the family‘s new foundation and the schoolroom in Upstate Golisano Children‘s Hospital. In the schoolroom, thousands of children stay connected to their classrooms with special distance-learning units, along with electronic learning devices, such as laptops. With the help of Lukie‘s brother Matt, their other five children, other devoted family members and friends and dedicated volunteers, they have raised more than $450,000.

As a community partner, Dr. Frechette has been a corporate medical consultant, leading the occupational health efforts for Stickley Audi & Co. for the past 15 years. There, every Tuesday is “Vinnie Day.” He was also the school physician for the Fayetteville-Manlius school district, a Fayetteville-Manlius Pop Warner football medic, football and basketball coach and referee. For more than a decade, Dr. Frechette was an adjunct professor in the Physician‘s Assistant Program at his alma mater, Le Moyne College.

“He is a great leader, a role model, a caring doctor, a loving father and an exemplary person,” said a nominator.
Written by Susan Keeter
Published on Thursday, September 24, 2015 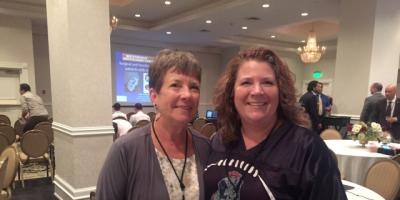 Research brings us closer to learning how to halt cell death