Watch carefully when “Irrefutable Proof” hits the big screen next year, and you may recognize a pair of women dressed as members of a religious order. Two diabetes researchers from Upstate got roles as non-paid extras in the psychological thriller that was filmed in January in Syracuse.

Ruth Weinstock, MD, PhD, is a longtime friend of the film‘s writer and producer, Richard Castellane. When he sought extras, she and colleague Paula Trief, PhD, signed up.

They assembled costumes from their own closets, “and the makeup artists made sure we looked like old ladies,” Weinstock said. The filming of the movie took place over several weeks at Syracuse University, the Onondaga County Courthouse in downtown Syracuse, the Landmark theater, the Regional Market, St. Paul's Episcopal Cathedral and Highland Forest. The film is now in post production.

“It was fascinating to see how complex the movie process is, and to see some of the behind-the scenes work,” Weinstock said.

Trief admitted she once fantasized about performing musical comedy on Broadway, “even though I can‘t dance, and my singing is just so-so.”

Weinstock is medical director of the Joslin Diabetes Center at Upstate and chief of endocrinology, diabetes and metabolism in the Department of Medicine. Trief is a professor and senior associate dean for faculty affairs and faculty development at Upstate. Neither has plans to pursue a second career in acting.

This article appears in the spring 2015 issue of Upstate Health magazine.
Published on Friday, May 29, 2015 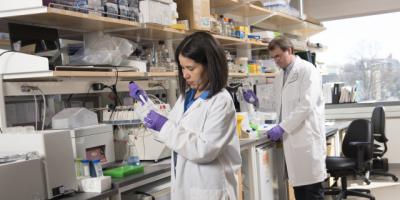 Regenerative medicine teaches the body to repair itself

What to expect from a neurological exam

Preventing the spread of HIV with a pill