The Central New York community made the Upstate Cancer Center possible, with many donations coming directly from grateful patients and family members. The Foundation for Upstate Medical University was the hub for the philanthropy which drew the support of thousands of people. The four-year fundraising effort brought in $17.4 million for the center.

Toni Gary, a development director at the foundation, says more than 325 individual children and school groups made donations. Student and community groups sponsored efforts that included a fishing fundraiser that brought in $450 in May and a basketball fundraiser in April that brought in $4,200. The Phoenix High School Lady Firebirds varsity pitcher, Megan Brown, raised $2,000 over 20 games by securing pledges for strikeouts. A Liverpool Middle School teachers' basketball game held in March raised $1,600. A wrestling tournament in January at Skaneateles High School raised $1,300.

A $32,000 gift from the Alive! Foundation will help support the new therapeutic music program in the Upstate Cancer Center. The money was raised through the foundation‘s Ride for Alive!, an annual cycling event that takes place in July in Skaneateles.

“We are committed to helping cancer survivors live well,” says Julia Wamp, co-founder of Alive! Foundation. Wamp, a cancer survivor, and her husband Michael established the foundation in 2012 to educate and empower survivors to live healthier, happier lives.

A Fulton teacher, Danielle Delfanian has raised more than $5,000 since 2011 by making duct tape rose pens, wallets, hair clips and bracelets through her organization, Roses for Breast Cancer.

Paige‘s Butterfly Run attracted more than 2,500 participants this June for its 5K race, 3K fun run/walk and Caterpillar Crawl for kids in downtown Syracuse. The event has raised more than $2 million over the past 18 years to benefit pediatric research and cancer care. The money is also used to provide patients and families with “comfort kits,” gift cards for food and gas to those traveling far and other amenities to help meet the needs of a life that has suddenly been turned upside down.

The kickball tournament took place in May. Photo by Doug Rosenthal.

More than 175 players on 17 teams played in the Kick Cancer Kickball Tournament in May. They raised more than $2,400 this year, bringing the three-year total amount of money they have donated to the Upstate Cancer Center to more than $6,000. Doug Rosenthal, who works in Information Management & Technology at Upstate, helps to organize the event, which takes place at the Syracuse Kickball Park in Liverpool.

Upstate had a presence at breast cancer walks and runs, including the American Cancer Society's Making Strides Against Breast Cancer; the Carol M. Baldwain Breast Cancer Research Fund's A Run for Their Life; and the Susan G. Komen Race for the Cure. A new grant from Komen will help underserved women secure their mammograms. 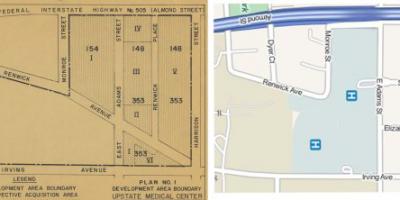 Revitalizing through reading as you recover from illness, injury