When Community General Hospital became part of Upstate in July 2011, Volunteer Services Director Kristin Bruce was left wondering what to do with 300 pink volunteer smocks, many  embellished with the old hospital logo.

The smocks were in great condition, so it made sense to try to recycle them.

Volunteers Dick and Barb Bratt suggested that some of the smocks be donated to Robinson Presbyterian Church USA. There, a missionary group was collecting clothing items for people in need living in Uganda.

Months later, an email arrived from Ngamije M. Faishal of Kasese, Uganda with thanks for the smocks, which were put to use in the distribution of goods to men, women and children.

Closer to home, more than 70 of the smocks were donated to the Syracuse City School District, for students to wear during art classes. And 50 smocks that were not customized with the hospital logo were donated to the team of volunteers serving the Centers at St. Camillus in Syracuse.

“To see these Community General Hospital volunteer smocks being used halfway around the globe is amazing,” says Bruce. “What‘s more, the volunteers themselves truly appreciate the legacy of their uniforms and are humbled to see their repurposed use today.”

Urge to smoke begins in utero 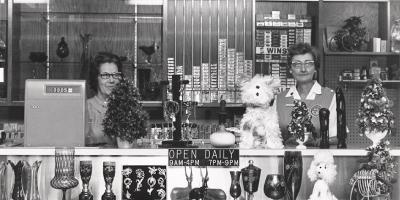