For forty years, Charles, 87, and Rose, 86, Calligaris drove together to work at either Community-General Hospital or Upstate University Hospital. Charles was an administrator and Rose was a volunteer at both hospitals. After his retirement, they both volunteered to staff the gift cart at the downtown hospital.

The Calligarises remember opening the doors of Community Hospital fifty years ago: Charles and Rose were there all night, along with fellow administrator John Brown and his wife. Chimes went off at midnight, announcing the opening of the new hospital and by 8:30 in the morning, hospital staff had delivered the first baby.

Charles was on the planning team for Community Hospital.

Charles was hired in 1958 to help plan the hospital at 4900 Broad Rd. The hospital planning team — comprised of Calligaris and the directors of nursing, medical services, and physical plant — had an office in the Wilson Building on South Salina Street, and met weekly with architects, King and King, and the engineering firm.

It was the first fully air-conditioned hospital in the area, thanks to Carrier Corporation. Byrne Dairy had the milk contract for the hospital‘s food services. All the big local businesses at the time — General Electric and Syracuse China, to name two — were major contributors to the building of the hospital. In total, $7.2 million was raised by 48,000+ individuals, foundations and corporations and a $2.2 million federal grant provided additional funding for construction.

Charles has proud memories of working on a national research project with IBM. Community was one of three hospitals in the US that collaborated with IBM on the design of computer programs for patient billing and records.

Feb. 1963, Herald-American: Charles gives a talk on the new hospital.

Charles worked at Community from 1958 to 1970, for several years at Plaza Nursing Home, and at the downtown hospital from 1973 to until his retirement at 1986. His hospital work began in 1952 as a student employee in the treasurers‘ office at Good Shepherd Hospital (the precursor to Upstate University Hospital).

How did they meet? Charles was attending Syracuse University on the GI bill, and Rose was working as a secretary at a local business. They took the bus from Solvay to downtown Syracuse every morning, and began walking to the bus stop together. After a short time, Charles asked Rose‘s father for her hand in marriage. They started married life in an apartment upstairs from Rose‘s parents. Today Mr. and Mrs. Calligaris are the parents of four daughters and grandparents of three.

Here is a video of the Calligarises, created by Kristin Thompson and Susan Keeter using images from Upstate‘s Health Sciences Library and Onondaga Historical Association.
Written by Susan Keeter
Published on Thursday, February 6, 2014

Plan now for this disaster preparedness lecture on March 20 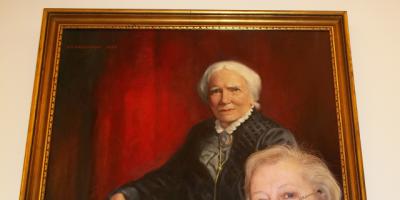