Jude with his mom, Bridgett Langstaff at this year's fundraising walk.

Every fall for the last five years, Bridgett Langstaff has helped organize a walk to raise awareness for tuberous sclerosis complex, a genetic disease that affects her son, Jude.

The boy will turn 5 in November. He seemed like a healthy baby when he was born in 2008. As his grandmother changed his diaper one day, she noticed a white splotch on the back of his thigh. “Oh, he‘s got a birth mark,” she exclaimed. But Langstaff said there was no birth mark.

Langstaff, a nurse who works in pediatric intensive care at Upstate University Hospital, asked her pediatrician about the spot, which was shaped like an ash leaf. The doctor examined it closely, using an unltraviolet light, and sent the mother and child to a dermatologist.

When the doctors said they believed the boy had tuberous sclerosis complex, Langstaff recalls, “That was life changing for me.” She had cared for children with the disorder. She knew it was incurable, and that most people with the disease suffer seizures.

“It was a complete shock to us,” she recalls. Since then she has learned that 66 percent of tuberous sclerosis cases are a result of spontaneous genetic mutation, meaning neither parent had the disorder. Tuberous sclerosis is the leading genetic cause of autism.

Jude did develop seizures. Once doctors determined where in the brain they originated, Jude underwent surgery, in 2012. He is significantly developmentally delayed.

“There‘s no cure. That‘s why we do the walk, so we can fund research,” Langstaff says. “Ten years ago we didn‘t even know the genes that cause this, and now they have isolated the genes.”

“Hey, Jude” is the song that plays at the start of the walk each year. Jude is there with his sister, 6-year-old Lundy. The boy seems to understand that the walk is about him. Money raised goes to the Tuberous Sclerosis Alliance. Langstaff says the efforts have raised $90,541 so far.
Published on Friday, October 25, 2013

Consortium for Culture and Medicine elective courses open to the public

What is tuberous sclerosis complex? 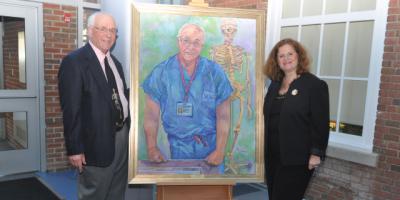