Alisa Hoff loves Zumba classes when she is not working as a pediatric nurse at Upstate.

Pediatric nurse Alisa Hoff doesn‘t make a lot of promises, but she has this to say about the popular Latin dance fitness classes she teaches: “Absolutely you are going to sweat, and you are going to have fun.”

Hoff, who teaches hour-long Zumba two or three times a week at Dancing Kats in Mattydale, got hooked on Zumba when coworkers insisted she try it. Previously she did not follow a fitness routine.

“I used to run, but I never stayed with it,” she says. “This is the first thing that I actually stayed with continually. It‘s fun. It‘s the results, and it‘s the people you‘re with that make it fun.”

She has seen herself and other lose both pounds and inches and increase muscle tone. She has also watched students build confidence. They start out at the back of the room and gradually take places on the front row. Most of the classes are filled with women, but some men enjoy Zumba, too.

“The best thing about Zumba is, it doesn‘t matter what you look like when you‘re moving,” Hoff says. She tells her students, “I want to see a lot of smile and a little bit of sweat.”

To anyone who hasn‘t tried it, Hoff explains the simplicity of Zumba. “It‘s just dancing your stress away. You‘re guaranteed to feel better afterward.”

Find this and other stories about health and fitness in Central New York in the summer issue of Upstate Health, the consumer magazine provided by Upstate Medical University.

Should patients get their lab results before their doctors do?

What action is appropriate if a mentally ill person makes a threat? 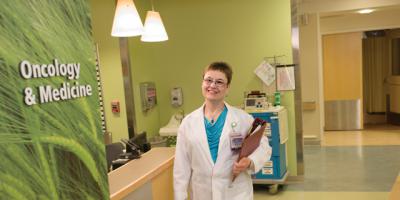 First response after Hurricane Sandy: 'I have to do what I can to help