Photographer Bob Mescavage took pictures of Cristina Pope at Gold's Gym in DeWitt, where she works out.

Librarian Cristina Pope does standard pushups (from her toes, not her knees) and stomach crunches with a weight held between her legs. Photo by Bob Mescavage.

A year ago, Cristina Pope stepped on the scale and saw 249.7 pounds. Today the Director of the Health Sciences Library at Upstate weighs a healthy 140 pounds. Along with 110 pounds, she lost 80 inches of girth. The percent of her body fat improved from 40 percent to 22 percent.

She tracks everything she eats, and she spends many hours exercising, lifting weights, swimming and running.

“It‘s not for a week or a year,” Pope says of her new lifestyle. “It‘s forever.”

She was pudgy as a child, but slender as a young adult when she had a job that allowed her to walk to work. She put on weight when she began commuting, married and had a family, with big sit-down meals every night and little in the way of exercise. Relatives nagged her for years about her weight. She saw therapists and nutritionists. Not until she leafed through a catalog of library furniture -- and saw bariatric chairs for people weighing 500 to 600 pounds -- did she become serious about losing weight.

Impulsively, she joined Gold‘s Gym in June 2012 and started the Biggest Loser contest (which she went on to win – twice.) She started eating less, moving more and carefully watching her nutrition intake, not taking in more than 1,200 to 1,500 calories per day. Five or six weeks into the program -- which includes weekly training sessions and daily workouts and nutrition advice -- she shed 30 pounds.

Cristina Pope before she lost the weight.

Since December she has kept her weight at about 140 pounds, and because she exercises so much, she now eats 2,000 to 3,000 calories per day. Pope says losing the weight has been gratifying. She gets chilly more easily without the insulation, but her joints don‘t ache anymore, and she no longer avoids mirrors.

She ran her first 5K in 27 minutes, 20 seconds. Toning and sculpting her abdomen will take another year of work, but Pope enjoys her time at the gym and the new friends she met there.

How she does it

drinks 64 to 100 ounces of water, sometimes with lemon, throughout the day

tracks exercise and food intake using My Fitness Pal, available for free on line or as an app

weighs herself on a scale

uses a Fit Bit to count how many steps she takes

makes her own cereal by blending shredded oats, toasted whole wheat O's, rolled oats, Kashi Go Lean and Grape Nuts. She scoops 1 cup of cereal, then sprinkles 1 tablespoon each of chia, flax and cocoa nibs, with 3 ounces of nonfat Greek yogurt instead of milk

swims laps for an hour four times a week

works out with a trainer twice a week

five shrimp and half an avocado

with 3 ounces of protein

participates in a variety of cardiovascular exercise classes

and takes tap dancing class at the Jewish Community Center

vegetables of some type and 3 ounces of protein

or a protein and fiber smoothie

Recreational therapist shares how cancer led to a meaningful life

Upstate trivia: How many languages are spoken at Upstate? 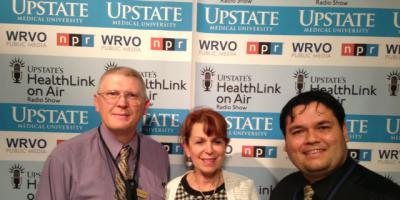