Through runs and other events, the Salt City Road Warriors have raised $55,000 for Upstate Medical University. Their 2013 goal is to nearly double that amount.

The Salt City Road Warriors are a team of  "lots of good people who want to raise money and run," says Sheri Dozier Owens, one of 60 runners in the team that supports research, patient care and education at Upstate Medical University. Each year, the Road Warriors, led by coach Maureen Clark, select specific Upstate funds to support. This year's goal is to raise $50,000 for heart disease and cancer services. They've already raised $15,000 at one event.

"My parents inspired me to have a special interest in raising money for  cancer research," says Dozier Owens, who is on the staff of  the Syracuse Community Health Center.  Her parents, Wilson and Mary Weatherly, died of cancer. Her father died of prostate cancer in 1993, her mother of colon cancer in 1999.

"She didn't do the screenings," laments Dozier Owens.

How did Dozier Owens start running? "Seven years ago, I lost 60 pounds and started running as part of staying healthy,” she explains.  “I ran my first marathon at Disney World in 2006."

Today, a little over a  week after the bombings at the Boston Marathon, what's on her mind? "There will never be another run where I don't think about those who lost loved ones or had loved ones who were injured," says Dozier Owens. "I can't imagine their heartache."

The Boston  tragedy isn't stopping Dozier Owens.  She's training for the Lake Placid Marathon to be held on June 9. It will be her ninth marathon.

A flower a day makes this doctor happy 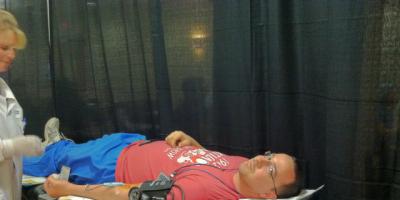