Study searches for biomarkers that could identify colorectal cancer

Colonoscopy has the undisputed ability to nip cancer in the bud, but many people find the screening unpleasant. Someday, maybe colonoscopy will be replaced by a simple blood or urine test.

Listen: interview about this study

A National Cancer Institute study underway at Upstate is looking for biological markers or biomarkers that signal the development of colorectal cancer the way pregnancy hormones signal a baby is growing. Leading the study are associate professors of surgery, Jiri Bem, MD, and David Halleran, MD, both of whom are colorectal surgeons.

Courtesy of the US Department of Health and Human Services' Gut-Check program.

The concept of using biomarkers to detect cancer is not new, but it is a hot topic among cancer researchers who are examining the potential of both protein and molecular biomarkers. The PSA test is already in use, to measure levels of prostate specific antigen in men with prostate cancer, and something similar is used to check for ovarian cancer recurrence in women.

What‘s new with this study being done at Upstate is the search for something in the blood or urine of a healthy person that could be used to reveal the presence of colorectal cancer before symptoms become apparent.

Bem says the potential is exciting, but this study is just the beginning. “This is going to be another small step toward that goal. It‘s going to take probably several years before we know what we‘ve achieved and where else we need to focus,” he says. The data collected in Syracuse will be included with data from about 5,850 other people in the United States.

Colorectal cancer is the second leading cause of cancer death in men and women combined. It has about a 50 percent mortality rate, which would be reduced if more people were screened regularly. The recommendation is every 10 years starting at age 50 for people with average risk. Experts believe 40 percent of people who should be screened, are not.

“Physicians can intervene and actually prevent the progression to a cancer,” Halleran explains. Colorectal cancers begin as benign growths called polyps. Finding polyps and removing them prevents the cancer, he says. That means undergoing colonoscopy, in which a long, thin tube is inserted through the rectum and into the colon so the doctor can visualize the inside of the large intestine. Any polyps found can be removed at the same time.

“Colonoscopy gives physicians the chance to be therapeutic as well as diagnostic.”

Listen: interview about this study

Read more about the study

To join the study

Researchers from Upstate seek at least 100 Central New Yorkers to be involved in a study of biomarkers that may signal colorectal cancer. Participants will be asked for stool, urine and blood samples before undergoing colonoscopy. To be involved, a participant must: 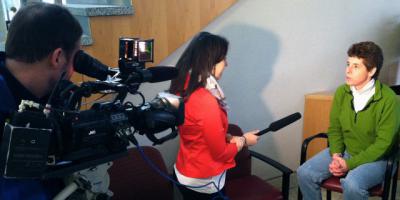