Ophthalmologist Anthony Andrews, MD, would like to offer the newly-approved retinal implant for adults with rare genetic eye disease at Upstate. He told YNN's Katie Gibas that he has been in contact with Second Sight, the company that makes the Argus II, the first implanted device for treating adults with retinitis pigmentosa. Andrews is an assistant professor of ophthalmology who sees patients at the University Center for Vision Care, 550 Harrison St.

The Argus II Retinal Prosthesis System, approved in February, includes a small video camera, a transmitter mounted on a pair of eyeglasses, a video processing unit and an implanted artificial retina that replaces the function of degenerated cells in the retina to improve a patient's ability to perceive images and movement. The video processing unit transforms images from the video camera into electronic data that is wirelessly transmitted to the retinal prosthesis, the FDA explains in a news release.

"It is a giant leap forward in our ability to improve vision for people who have no vision at all. These people had no hope whatsoever and now they have some ability to see and hopefully that will improve their function," Andrews says in the YNN segment. "The device basically gives people a series of bright lights and certain patterns and then the people have to determine what the patterns mean. And then it's how the patterns are interpreted that gives them vision."

Andrews says Second Sight has not yet determined which hospitals will offer the Argus II. 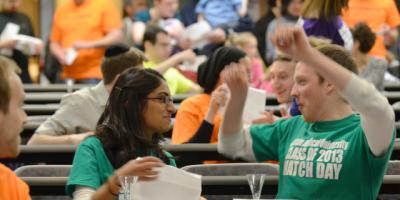 Study searches for biomarkers that could identify colorectal cancer