6-year-old Marrah Smith was one of the first to add her name to the beam.

Visitors to Upstate University Hospital get an up-close view of the construction at the Upstate Cancer Center. The now towering framework began rising out of the ground a little more than a year ago. Early this morning, its final steel beam-- measuring 23 foot-long, and weighing in at 600 pounds-- was carefully wheeled into the hospital lobby. This beam will be the one that completes the framework and brings the Cancer Center one step closer to opening its doors.

All those that have been touched by cancer are invited to leave their name on the beam. This morning, Cancer Center supporters, patients, friends, staff and hospital administrators gathered to kick-off the beam signing by affixing their names to it. Cancer Center campaign co-chair and SU Head Coach Jim Boeheim and his wife Juli, of the Jim & Juli Boeheim Foundation were on hand to lend their continued support to the project. Media were also in attendance.

The beam will remain in the Upstate University Hospital lobby until early March, when it will be lifted to its permanent home at the top of the Upstate Cancer Center.

Markers in colors that represent different forms of cancer are available for use on the white beam. When all signatures are in place, the beam will be coated in a clear varnish that will preserve the names, protecting them from the elements.

The Upstate Cancer Center is slated to open in Spring 2014.

The Upstate Cancer Center as it looks today. 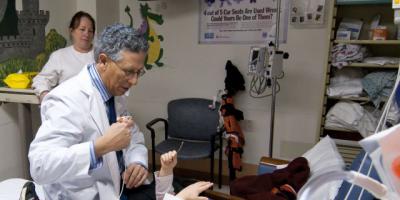