Scott Ulberg is a 3rd years medical student at Upstate Medical University -- and winner of the 2012 Empire State Marathon.

He runs every day. No matter whether he spends the day studying, or working all day and leaving the hospital at 8:30 p.m., medical student Scott Ulberg, 24, always gets his run in. He logs 110 to 120 miles per week.

"It's not a matter of having time. It's a matter of making time," he says. "I just pack my bag in the morning and throw it in my trunk. There are no excuses."

His training paid off Sunday when Ulberg won the Empire State Marathon in Syracuse with a time of 2 hours, 38 minutes and 49 seconds. It was Ulberg's third marathon. He ran the New York City marathon last year in 2:37:44, and the Long Island Festival of Races in 2010 in 2:53:08. Since coming to medical school at Upstate, Ulberg has been active in running events throughout Central New York.

He ran cross country at Stony Brook University, and for his high school on Long Island before that. Now he trains with Kevin Collins, the running director at the YMCA.

Ulberg has been working on his running form, trying to stay up on his toes. He believes that -- along with the hilly course between miles 7 and 20 -- may have contributed to the leg cramps  he experienced during Sunday's 26.2-mile run. He wore compression shorts, a tank and black gloves on his hands. He wore Nike Lunaracers on his feet.

While he expected he would toward the front of the pack, he planned to run his own race.

"I wasn't winning the whole race. I was in second place around mile 13," Ulberg recalls. Of the runner he was following, he says, "he pretty much came to a walk around mile 21." That's when Ulberg passed him, although Ulberg wound up stopping a few times after that to stretch his calves. His parents were waiting for him at the finish line -- along with a heavy finisher's trophy and a bottle of chocolate milk.

Among other runners from Upstate was a team of physician assistant studentsthat placed 26th in the relay division with a time of 3 hours, 52 minutes and 32 seconds. The team included Katie Bubnack, Chelsey Wallace, Liz Schwennker and Kimberly Palmowski. Competing in the 13.1-mile half marathon were PA student Matt Cook, who finished  in 1 hour, 46 minutes and 51 seconds; and Rachel Given, who finished in 1 hour, 38 minutes and 14 seconds.

See The Post-Standard photo of Ulberg. 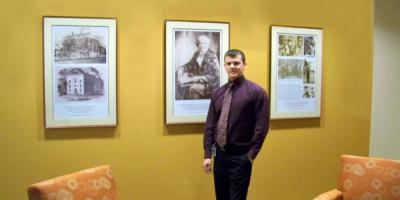