Look Back at Summer: A Camping Trip for Burn Survivors

In honor of this last day of summer, here‘s a glimpse of a beautiful Saturday in August when Upstate employees Chris Monahan, a burn center nurse, and Jackie Monahan,  an occupational therapist, invited friends and supporters to  a picnic at their camp for burn survivors.

The four-day camp was started 15 or so years ago as a refuge for children in upstate New York who‘d survived burns. It‘s been directed  by Chris for the past 13 years. Tommy Stevens, who was burned fighting a trailer fire in 1995, has been a camp counselor every year since he became an Upstate burn center patient. Bill Myers, a retired Upstate burn nurse, arranged for the camp to be held at Vanderkamp on the north shore of Oneida Lake.

Mitch Dyrer holds his son, Daniel, at the camp picnic.

This  group of volunteer counselors includes former Upstate burn patients and firefighters Adam Croman of Austin, Texas, who traveled to the camp at his own expense, and Mitch Dryer of Oneida, who lost his arm and an ear battling a bowling alley fire in 2007.

“The camp, literally, allows the kids to be comfortable in their own skins,"  says Mitch. “Here, nobody stares.”

Jonathan Wright, a college student at SUNY Delhi, has attended the camp every year since age 4, after his hands and arms were accidentally scalded with hot water. Jonathan remembers his first year at camp: “I  loved finger painting, making boondoggle.

“Here, everyone makes sure we‘re happy," Jonathan explains. “Burn camp reminds you that you‘re not alone.”

Here's a safe way to dispose of unwanted prescription drugs 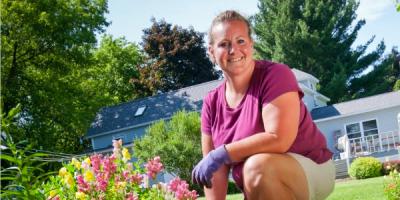