He was Director of Trauma for the 86th Combat Support Hospital deployed to Mosul, Iraq during Operation Iraqi Freedom, and then for two years he ran the Bariatric Surgery and Critical Care programs at Keller Army Community Hospital in West Point. Now Matthew McDonald DO operates at Upstate University Hospital.

McDonald, who completed a surgery residency at Upstate, said he will split his time between general surgery and bariatric surgery. He will see patients at the hospital‘s Community campus.

“Bariatrics is one of the few areas in surgery where you really have long-term follow-up with patients,” he said. “Not may fields in surgery really give you such patient interaction.”

During his training at Upstate, McDonald was elected to the Resident Advisory Committee from July 2005 to 2007. He received a Resident Teaching Award in 2003, the same year he was nominated for a Humanitarian in Medicine Award. McDonald‘s degree in osteopathic medicine comes from the New York College of Osteopathic Medicine. He got his bachelor‘s degree in biology at SUNY-Potsdam. 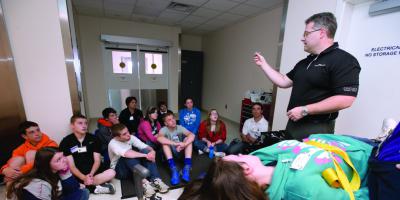 Here's an example of quality improvement in cancer care