You‘ve got your wellness groove on. You‘re eating right, exercising like a demon, and it‘s no fluke. You‘re not just dieting. You‘ve changed your lifestyle just like the experts advise. Then comes a crisis. A job loss. A break-up. A Justin Bieber CD stuck in your car‘s CD player. Next thing you know, you‘re going steady with a German chocolate cake.

I personally bumped up against the limits of “lifestyle change” last month when it became clear that my 84-year-old Dad‘s determination to continue driving his 1979 Chevy Caprice was highly at odds with his capacity to safely operate a motor vehicle. I caught a plane to my ancestral home, Seattle, and found a classic aging parent nightmare. Dad needed to go to the hospital, and both he and my Mom needed to be moved into assisted living. In less than 48 hours I went from a relaxing 4th of July on Skaneateles Lake to neck high in West Coast family drama -- and Dick‘s cheeseburgers.

To expatriated Seattlelites such as myself, a pit stop at Dick‘s Drive-in means you‘ve come home. Those latte shacks and glorious sunsets over Puget Sound could be anywhere, but Dick‘s ... that‘s Seattle. The drive-up burger joint with the friendly orange sign has been around since 1954. Approximately 4 percent of my existence has been spent trying to ascertain what makes the local chain‘s grub so irresistible. I‘m not alone. Maybe it‘s just a Seattle fixation, like Heid‘s or Dinosaur Bar-B-Que is here in Syracuse. Or maybe not. In a poll of Esquire readers asked to name their most “life-changing” burger, Dick‘s blew away the competition, including national powers Five Guys and In-N-Out Burger.

This is a long way of saying I gained 4 pounds in July. It wasn‘t all Dick‘s fault. It was too many meals on the run in general and about 15 too few visits to the gym during a three-week period. It was those medicinal pints of Northwest microbrew after 16-hour days of dealing with doctors, social workers, banks, attorneys and two needy parents. At Rays Boathouse, another Seattle landmark eatery, the waitress asked if I‘d like anything for dessert. My response, it‘s safe to assume, isn‘t endorsed by Michelle Obama's “Let‘s Move!” crusade. Instead of dessert, I ordered a second entree. Then I ordered dessert.

I submit the following two-pronged defense of my gluttony:

1.   Almost all of us are subject to human emotions.

Fact is, stress eating has its roots in our evolution as a species. Most likely it began when a bright-but-not-quite-bright-enough caveman, struggling to build a campfire in a rushing stream, threw down his club in disgust and devoured six Triple Bacon McMammoths -- and immediately felt happy.

A half-million years later researchers now understand the chemical cause and effect. When faced with chronic stress the body ramps up its production of cortisol, a hormone that makes us seek out pleasurable food. You eat a pan of lasagna. You feel better and you function better, in the short term.

Dwight, a high school friend whose mother died recently, was speaking to this cycle when he chided himself: “I just lost my Mom, so I have to eat brownies with ice-cream.”

In an evolutionary sense Dwight is correct: He is biologically obligated to eat brownies with ice cream and, I would argue, hot fudge sauce. Gaining a few extra pounds in a crisis to maintain sanity and keep you moving forward is a small price to pay. This is one of the few times when evolution got it right. It‘s just that in the long haul stress needs to be fixed, not fed. Binge if you must, but don't let a binge become your new baseline.

That‘s my current weight management challenge. Back in Seattle the situation with my parents has reached a new normal, enabling me to return to my life in Central New York. My stress level has gone down, and so has my food intake. The crisis isn‘t over. I‘ll still need to make a lot of trips back to Seattle in coming months. But I'll tell you one thing: You won‘t catch me going back to Dick‘s. 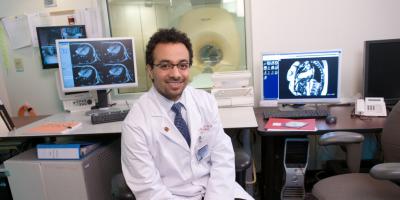