An 88-page booklet by Upstate's Dr. Jeremy Joslin MD called "Race First Aid" provides race directors information about medical issues that could occur during road race events, such as the Boston Marathon, taking place today in heat expected to reach 87. The Boston Athletic Association issued a warm weather advisory, saying inexperienced marathoners and those who trained only in cool climates should not race.

Pierre d'Hemecourt, the BAA's co-medical director, told Reuters that participants should be vigilant about headaches, dizziness, confusion, fatigue, nausea or vomiting, which can be symptoms of heat exhaustion or heat stroke.

"If you have underlying medical problems, such as cardiac disease or respiratory disease, think about not running," d'Hemecourt told the news service. "If you have a cough or cold, or had recent gastro-enteritis, don't run."

Joslin's booklet was compiled with help from Dylan Kellogg and Nathaniel Herr, whom Joslin describes as "two of the brightest and most motivated medical students I've met."

Among the heat-related illnesses of concern are:

Exercise-associated collapse -- a brief loss of consciousness in an active athlete, due to blood vessels that have dilated in the arms and legs. Volunteers are instructed to have the athlete lie down in a cool area, elevate legs and provide fluid with electrolytes (sports drinks) if the athlete is fully conscious and thirsty.

"This condition does not generally necessitate evacuation or emergent transport to medical facilities," the booklet says. "Resolution of emergent symptoms occurs quickly and may be considered sufficient for re-entry."

Spectators who stand for long periods in the heat can collapse for the same reasons.

Heat rash -- an itchy rash of tiny red or white bumps that occurs in a hot, humid environment because sweat glands are blocked. Volunteers are instructed to remove the athlete from the hot environment, to remove any wet clothing and dry the skin.

"Some rashes may resolve shortly after cooling and drying skin, while the remainder typically resolve in seven to 10 days," the booklet says.

Heat cramps -- painful contraction of active muscles in a hot environment, either because of electrolyte imbalance, volume depletion, hyperventilation or other reasons. Volunteers are told to remove the athlete from the hot environment and encourage rest. Fluid with electrolytes (sports drinks) is recommended, along with gentle stretching of the cramped muscles.

The cramps range from spasms in the hands or feet, to large muscle groups such as the abdominal muscles. Research shows that sodium depletion -- not potassium depletion -- is usually to blame. Once symptoms resolve, the athlete may re-enter the race.

Heat edema -- accumulation of fluid in hands and feet, due to dilation of the blood vessels and swelling in the tissues of the hands and feet, usually because the athlete has not been completely acclimated to the environment.

Volunteers are told to have the athlete rest in a cool area and elevate swollen limbs.

Heat exhaustion -- when the body produces more heat than it is losing, causing fatigue and a general feeling of unwellness.

Symptoms include weakness, inability to exercise, headache, nausea, faintness, trouble breathing, rapid heart rate and a normal blood pressure. "Skin may be warm or cool and is usually sweaty," the booklet says. "The presence of sweat does not exclude heat stroke, a common misconception."

Volunteers are told to have the athlete rest in a cool area and initiate cooling with wet towels and fanning. Also, fluids with electrolytes (sports drinks) are recommended.

Heat stroke -- when the body has lost the ability to cool itself, permanent organ system damage or death is a possibility if not treated promptly.

Symptoms include altered mental status ranging from simple confusion to bizarre behavior to complete unresponsiveness. "Ataxia, a difficulty with coordinating movements such as walking, is commonly seen and should be a major red flag. An example is a wobbly run, or inability to move in a straight line," the booklet says. "Skin is typically flushed, not and sweaty, but may appear dry."

Volunteers are told to summon help from medical personnel if they suspect heat stroke. Meanwhile, have the athlete rest in a cool area and remove his or her clothing in order to initiate aggressive cooling by wetting the skin and fanning. Ice packs or ice-water soaked towels can be placed at the neck, armpits and groin. "Symptoms may improve with rest, but this does not obviate the need for definitive treatment and medical intervention," the booklet says.

Hyponatremia -- less than the normal amount of salt dissolved int he bloodstream, likely from drinking too much plain water. This condition can be due to diminished salt intake or increased salt excretion, but in athletes it is generally because of a greater fluid intake (through drinking) than loss (through sweat and urine.) Use of ibuprofen and other non-steroidal anti-inflammatory drugs contributes to the problem.

Volunteers are told to encourage athletes to drink only when thirsty and to provide fluid with electrolytes (sports drinks.) Plain water is to be avoided during extended races.
Published on Monday, April 16, 2012 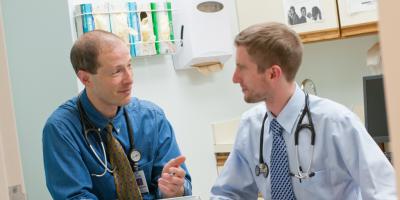 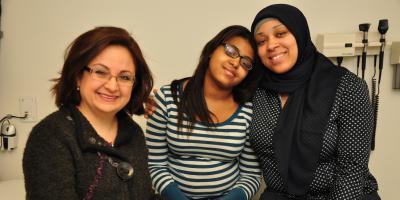