Bernie Poiesz‘s dog, Beacon, (right) who will be 4 in May, is a cousin to Michael Poiesz‘s dog, Finnegan, who is 8 months younger. As faculty members of Upstate, both men take care of patients, conduct research and help train health care providers.

Ice crystals coat the boardwalk as first light dawns in the marshes of Labrador Hollow, south of Syracuse, almost into Cortland County. Snow dusts the mountain tops. Wild holly berries are stark against foliage turned to brush. This swath of nature is quiet – until you hear bells.

Beacan and Finnegan wear bells attached to their collars so that wildlife gets early warning of the Irish setters out for their weekly long run with their owners, Bernie Poiesz and his son, Michael Poiesz.

The men – both doctors specializing in cancer care and cancer research at Upstate -- cherish early Saturday mornings together with their dogs. The younger Poiesz runs 8 miles of trails with the dogs. The older Poiesz hikes part way and meets up at various points along the route. This is their time, an efficient mix of bonding and fitness, and they don‘t muddle it with medical talk.

“I put in long hours at work, but I learned long ago not to take it home,” Bernie Poiesz says. The tips of his ears start to redden as wind ruffles his hair, and he presses ungloved hands into the pockets of his sweat pants.

Michael Poiesz moved back to Central New York in the fall, joining the Upstate faculty after completing a fellowship in cancer and blood disorders at New York University Medical Center. He and his wife, Lisa moved in with his parents in Tully, on property Bernie Poiesz purchased in the mid-1970s when he was a resident at Upstate.

Poiesz is a big name at Upstate and within the biomedical sciences in general. It was Bernie Poiesz who helped identify the first retrovirus in humans, isolating the human T-cell leukemia virus, or HTLV, while working in the lab of Robert Charles Gallo, the scientist best known for his role in the discovery of HIV, the Human Immunodeficiency Virus.

Michael Poiesz began following in his father‘s footsteps when he worked in his father‘s lab for a 7th grade science fair project. He helped design polymerase chain reaction primers that could be used to detect HIV. This was before the Nobel Prize was awarded to the developers of the PCR technique, which amplifies a single piece of DNA to generate millions of copies of a particular DNA sequence.

“When I was in the 7th grade and doing this, the technology of PCR was in its infancy,” he says. His father points out that the work led to the creation of the first HIV-2 test using PCR in the United States, and it is still in use today.

Throughout school, the younger Poiesz was far more interested in science classes than literature. He played saxophone and for a while dreamed of becoming a musician. When he visited the lab at Upstate, his father says, “I think he probably saw that we were all having fun doing what we were doing,” and that got him thinking of a career in medicine.

The Poiesz family always had Irish setters as companions. “They were always with us. I grew up like that,” Michael Poiesz recalls. “When I don‘t have a dog, it feels like something is missing.” So he and his wife, Lisa added Finnegan during their time in New York City. They went to the same breeder who supplied his parents with Beacan. They drove to Whitney Point in Broome County to look at a new litter of puppies. Finnegan is the pup who approached them first.

“Moreso than the others, I felt he had personality, which is a double-edged sword,” Michael Poiesz explains. “He was clearly the male of the litter, the dominant male.” Finnegan proved to be “quite a handful” as a puppy. Poiesz worked with him constantly to teach him who was boss, and he had to channel the dog‘s high energy.

“If you don‘t exercise and run long distances, you don‘t get an Irish setter,” Poiesz says. “You have to be willing to be outdoors, and you have to like it.” Even in New York City. So, a nightly run in Central Park became their ritual. It was good for both of them.

“I‘m so busy, there‘s not a lot of room in my life outside of work,” Poiesz says. Running with Finnegan keeps him, and the dog, in shape and in good spirits.

Now Finnegan lives under the same roof as Beacan, at least temporarily, while Poiesz gets used to earning a paycheck. He says his father spoils both dogs. “He‘s like the fun uncle who lets you do what you want.”

The father and son don‘t cross paths that often at Upstate, although they both take care of a mix of patients with cancer and blood disorders in the hospital and in offices throughout Central New York. Bernie Poiesz still researches retro-viruses in his lab. Michael Poiesz is likely to develop his own field of study as his career progresses. If his father has taught him anything, his weeks will continue to include long runs with dogs.

The Poiesz men are on the cover of the winter issue of Upstate Health.

Do you dare run an ultramarathon? 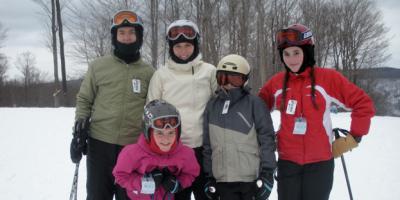