Enginner Mark Raulli, of Raulli & Sons, Inc., pored over his company‘s bid to build Upstate‘s new Cancer Center. It was a meticulous process that required details of how the job would be carried out and what equipment would be used, along with cost projections and timetables.

It was a dark time for Raulli, and not just because it was late February in Syracuse. His wife‘s father, Leo “Nipper” Heaphy of Phoenix, faced stomach cancer.

The 90,000-square-foot structure on which Raulli was bidding would eventually house the doctors, nurses and staff who were taking care of his father-in-law.

Heaphy developed weakness in his arms and legs in the fall of 2010. His doctor ordered a variety of scans, and a spinal tap. The man kept getting weaker. Finally Heaphy was unable to steady himself to walk. His doctor referred him to Upstate in November 2010.

Caregivers found a tumor attached to the outside of Heaphy‘s stomach, near where the esophagus connects, and they discovered the cause of his weakness. A rare encephalitis caused by the cancer was squeezing his spinal cord.

Surgeons removed Heaphy‘s stomach and some of his esophagus in December 2010. He was released from the hospital for rehabilitation about a week before Christmas, and his family brought him home to celebrate the holiday.

Several weeks later, a scan revealed spots on his liver. Heaphy began chemotherapy, but when the spots tripled in size within a month, he made the decision to halt chemo and live out his life.

“He got weaker every day, and lost weight,” Raulli recalls.

Heaphy rallied for a party on July 3 at Green Lakes State Park. He was able to kick back and drink a beer with his brother and enjoy his extended family. “That was about as happy as he could be,” Raulli says.

Heaphy died two days later, at the age of 71. He donated his body to science, through Upstate. Two days after that, Raulli‘s wife, Wendy learned she was pregnant.

Raulli‘s company wound up winning the bid to erect the steel and is working on the construction site in front of the hospital.

“It‘s kind of hard to put into words,” Raulli says of the pride he feels in helping to build the Upstate Cancer Center. “It means a lot.”

Teaching women about heart attack may save lives 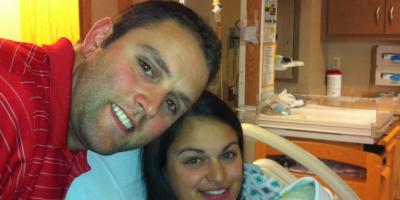 Babies are born at Upstate just about daily