Dr. David Halleran, the surgeon who tried to save John Lennon's life, recalls the events of Dec. 8, 1980

This memorial, donated by Naples, Italy, is located in "Strawberry Fields," the section of Central Park across from where Lennon lived with his wife, Yoko Ono.

David Halleran MD was a third-year general surgery resident at Roosevelt Hospital, busy with a consult about 10:45 p.m. Dec. 8, 1980 when he was paged to the emergency department. A police car was en route to the hospital carrying a patient with a gunshot wound to the chest.

From the police car, he was placed on a stretcher and wheeled into room 115. Members of the trauma team started intravenous lines, placed a breathing tube and cut off the patient's clothes -- a red T-shirt, leather bomber jacket and jeans. Halleran quickly prepared for a thoracotomy, to cut open the man's chest.

"He was not responsive, didn't have a pulse, didn't have a blood pressure," Halleran says in an interview for Health Link on Air radio, which airs at 9 a.m. Sunday, Dec. 11.

Halleran used his hands to squeeze the man's heart, trying to restore life. About 15 minutes into the lifesaving effort, a  nurse commented that the man looked like the Beatle, John Lennon.

Someone opened the man's wallet. It contained a gold American Express card with the name John Lennon and a picture of Lennon with his son, Sean in front of a white Rolls Royce, Halleran recalls. They didn't want to believe what was happening.

Halleran says the team worked on Lennon for about 45 minutes before he pronounced him dead. Lennon bled out, most likely because bullets tore the large vessels below his collar bone. Halleran did not come across a bullet in Lennon's body but says the medical examiner may have.

Halleran, who now works as a colorectal surgeon at Syracuse's Upstate University Hospital at Community-General, admits that he felt "a little nervous" to be working on Lennon. Afterward, he was upset by the death. "I personally couldn't turn on a radio or read a newspaper for three days."

Media reports about Lennon's death have not been accurate, Halleran says. He is sharing his story to set the record straight about how things happened that night. Halleran was a Beatles fan. He particularly liked Lennon's last album, "Double Fantasy," produced after he put his career on hold to take care of his son.

Listen to Halleran's story on Health Link on Air radio.

Read/watch the story on CNYCentral.

Read/watch the story on YNN.

Read/watch the story on NewsChannel 9. 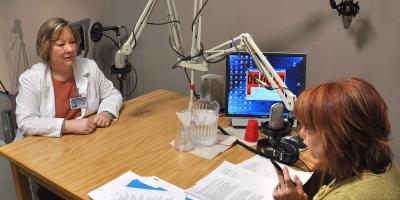