The Watertown Daily Times is showcasing the unlikely bond that has formed between two cancer survivors, a 17-year-old boy diagnosed with diffuse large B cell non-Hodgkin‘s lymphoma and a woman who volunteered at his benefit and later was diagnosed with ovarian cancer.

The story in Sunday's newspaper explains how Benjamin R. Towles of Adams Center, a wrestler, has undergone multiple surgeries and chemotherapy at Upstate since his January 2011 diagnosis. He spent a week straight in the hospital every 21 days through the end of April, the story says.

Linda J. Welsh of Alexandria Bay met Towles and his family when she volunteered at a benefit in March and then connected with them on Facebook. The day in May when she returned from a doctor's visit with a cancer diagnosis, she got onto Facebook to clear her head. There, she read that Towles was cancer-free.

"I said, ‘I can‘t rain on his parade,‘” Welsh told the newspaper. “He was immediately there for me. We once sat in the mall for four hours, talking about cancer, living, dying, and we compared notes, yet we‘d also talk about the weather. He‘s like my ray of hope. That support is huge.”

Read the story in the Watertown Daily Times. 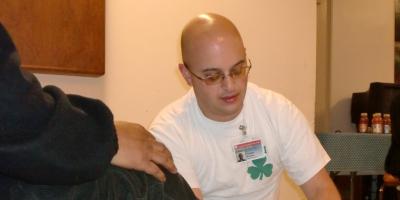 What to do about heavy menstrual bleeding