Charles Lutz, MD, director of robotic and minimally invasive cardiac surgery at Upstate, poses with the hospital's new da Vinci surical robot. The device is named after Leonardo da Vinci, who invented the first robot using unparalleled anatomical accuracy and three-dimensional details to bring his masterpieces to life. Robot models on the horizon will have arms that bend like snakes and allow surgeons to operate through natural orifices without making external incisions.


Patients facing surgery have the same desires as their surgeons: reduced risk of infection and blood loss, brief hospital stays, minimal pain and scarring, and quick recovery. Often patients have heard about the da Vinci surgical robot and ask whether it is an option in their situation.

The answer: It depends.

It depends on the type of operation, the extent of disease, whether the hospital has invested in a robot, the surgeon‘s judgment and experience, and the patient himself or herself.  As for any minimally invasive surgery, pregnant women and people with bleeding disorders or significant cardio-pulmonary conditions are not candidates. (Health insurers, by the way, generally treat robotic surgery like any minimally-invasive procedure.)

Some surgeons believe the robot is a tool that allows them to perform certain operations better. Here‘s how: The da Vinci is designed for use during complex procedures in small, hard-to-reach spaces.  Four arms enter the patient through 1- to 2-centimeter incisions or “ports.” One is a camera.

That camera‘s view is magnified up to 15 times to a console where a surgeon sits near the operating table. He or she manipulates the camera and the three other arms using controls that look like computer game joysticks. The robot‘s hands have better dexterity than human hands, and they have no tremors. They fit into miniscule spaces where a surgeon‘s hands would not.

“The visualization with the robotic system is much superior to conventional surgery,” Charles Lutz, MD, director of robotic and minimally invasive cardiac surgery at Upstate, told The Post-Standard newspaper. At the same time, plenty of surgeries are still best done in the conventional open fashion, where surgeons have access to a wide operating field.

Jack Hsu, MD, associate professor in Upstate‘s otolaryngology department, says “an individualized plan of care is created for every patient,” which may or may not include the robot.

Upstate was the first Syracuse hospital to buy a da Vinci robot. It is used in a variety of specialties, including:

* dissection of lymph nodes in uterine and ovarian cancers

* variety of cases, as needed

* removal of kidney tumor and repair of kidney

* complete or partial removal of bladder 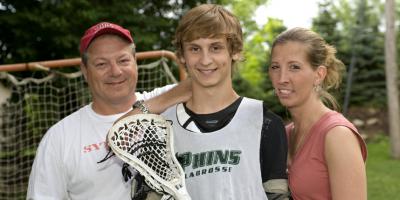 One amazing save: Quick action brought DeWitt teen back to life after a lacrosse ball slammed into his chest

No more narcissism: The official diagnosis fades, but narcissists will still believe the world revolves around them