Created in 1997, the Chancellor’s Award for Student Excellence, recognizes students who have best demonstrated, and have been recognized for, the integration of academic excellence with accomplishments in the areas of leadership, athletics, community service, creative and performing arts, campus involvement, or career achievement. Sweeney is the only student from Upstate to receive the award in 2020 and one of only 213 to receive it from among SUNY’s 415,500 students this year.

Sweeney, who is originally from Troy, NY and is now living in Albany, was one of 65 Upstate students who recently graduated early in order to join fellow health care workers fighting the COVID-19 pandemic. He graduated at the top of his class and was one of only two students in his class of 170 elected to both medical honor societies, Alpha Omega Alpha and the Gold Humanism Honor Society.

He is scheduled to begin his residency in neurosurgery at Albany Medical Center on July 1. Sweeney’s interest in the field of neurosurgery is personal. In the summer after his first year at Upstate, Sweeney’s girlfriend, Amanda Benacquisto, had to have surgery to remove a tumor in her pituitary gland near her brain. Witnessing her treatment and getting to know her doctors were of great influence.

“Her doctor found out that I was a student while I was in the hospital with her and going to her appointments,” Sweeney said. “He offered to have me come shadow and see some of his surgeries if I wanted to. I took him up on it and kind of fell in love with the field.”

Benacquisto has since fully recovered and the two became engaged in September 2019 with a wedding planned for late 2021. She also just graduated with a master’s degree to be a nurse practitioner.

“We’re super excited to both be in the same place,” he said. “Residency is seven years so we’ll both be into our 30s when I’m done so to have our families and support system around us during that time will be really important.”

Sweeney said Upstate was a perfect fit for him for medical school and he’s going to miss his friends, colleagues and teachers.

“I really enjoyed my time in Syracuse. I’m sad that I’m leaving there,” he said. “When I look back at my time at Upstate I think of how friendly and open to help people are. If you have an idea and you’re motivated to pursue your idea, or you have an intellectual interest that you want to pursue, the school, the faculty, the other students and your peers at Upstate are all there to support you.

“Because of the way the curriculum is designed it kind of takes away that competitive edge that occurs at other schools. So everybody at Upstate is in it to help each other out. And I think that has made medical school so much easier for me. It’s helped me to excel because I’m in an environment of supportive people in a supportive culture.”

Sweeney said he felt lucky to learn from countless talented professors during his four years at Upstate but named two mentors in particular: Upstate Vice President for Academic Affairs Lynn Cleary, MD, who nominated Sweeney for the award; and Dean of the College of Medicine Lawrence Chin, MD, a neurosurgeon who also encouraged Sweeney’s interest in the field.

“Jared was one of the most optimistic and hard-working students I’ve ever had the fortune of working with,” Chin said. “If you gave him an assignment, it was done immediately with attention to detail and great insight. He would also take initiative with ideas that showed imagination and creativity. Lastly, I found him to be a kind, compassionate and respectful person who will be an outstanding physician.”

Sweeney described the award as a “tremendous, tremendous honor,” and “a dream come true.” The mentors he found at Upstate have inspired his passion not only for medicine but also for teaching, he said. Sweeney helped found a program at Upstate through the Alpha Omega Alpha honor society that created “drop-in hours” for fellow medical students. Once a week, from 9 a.m. to 5 p.m., a member of AOA would make themselves available on campus to help with schoolwork or just talk about the stresses of medical school. Sweeney worked many of the all-day shifts to help his peers.

“It was really powerful and meaningful to be able to do that,” he said. “My desire to teach and be available to help other students and build on the positive culture I found at Upstate is a tremendous part of what we do.”

Sweeney said he hopes his fellow graduates can still celebrate their many accomplishments despite not being able to gather for an in-person graduation due to the ongoing pandemic.

“We’re very fortunate to be able to take the next steps and be able to support our community and our society through this difficult time, especially medical graduates moving into the medical field. Right now we’re needed more than ever,” he said. “We’re entering a field at a time when we’re probably appreciated and recognized more than ever for the work that we do and so not abusing that, not taking advantage of that, is a great way to be productive. And just being thankful that we’re healthy and trying to be as optimistic as possible.”

Caption: Jared Sweeney and his fiancee, Amanda Benacquisto, are living and working in Albany. 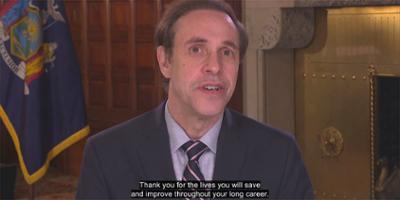 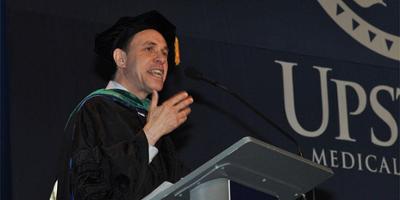 Upstate to hold virtual Commencement May 1 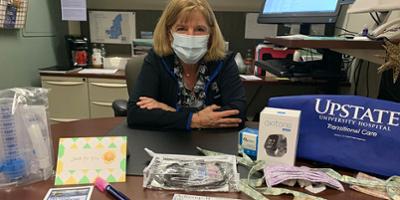 The clinic is also providing comfort kits with a mask, card and other supplies. 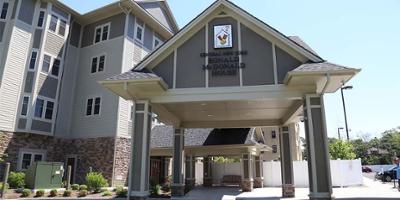 The house, only blocks away from the hospital, will provide emergency sleep...