An Upstate physician recently returned from a disaster relief trip to the hurricane-ravaged Bahamas where he provided medical care for up to 600 people – many of whom had never before seen a doctor.

David F. Lehmann, MD, PharmD, who has gained a reputation for visiting and treating the local homeless population, has traveled with International Medical Relief (IMR) before – to Haiti and Puerto Rico after disasters there. IMR is a registered medical organization that provides mobile clinics, health education and disaster relief in 70 countries around the world.

Lehmann, a distinguished service professor of medicine at Upstate, traveled to the Bahamas for a week in mid-September, about two weeks after Hurricane Dorian struck the region. Dorian is being regarded as the worst disaster in the country’s history, killing at least 65 people with more than 1,300 still missing. The storm left more than 70,000 people homeless as sustained 185-mile-per-hour-winds hovered over the island for 24 hours.

Dorian destroyed entire communities, including the Abaco Islands, which is where Lehmann’s relief mission was originally supposed to be stationed.

“But they blocked anyone from going in there,” Lehmann said. “The entire island was demolished. They got as many people out of there as they could. They had to bury their dead and bulldoze the land.”

For that reason, Lehmann’s IMR group was stationed in Freeport, which is the southwestern section of Grand Bahama, also battered by Dorian. Once there, the IMR team of two physicians, three nurse practitioners and seven nurses began treating a Haitian community with little access to health care, even before the hurricane.

“None of them had seen a doctor in their lives,” he said. The team treated patients for injuries sustained during the hurricane and saw many people with post-traumatic stress disorder. Some fled other parts of the Bahamas, while others are refugees from the devastating earthquake that hit Haiti in 2010, which killed 230,000 people. Despite their injuries and difficult circumstances, Lehmann said the patients are resilient.

“The patients are fantastic,” Lehmann said. “Once you get past the shell shock and quiet desperation that they have, they are just wonderful.”

Lehmann and his team went out into the streets of Freeport to encourage residents to visit the clinic and to find shut-ins in the community. That’s where Lehmann met “Mama Marie,” the Haitian family matriarch of her block.

“She is the neighborhood beautician and her shop was flooded,” he said. “We bonded because my mom was a beautician. She helped us throughout the day getting to know folks and getting them to the clinic.”

Lehmann and his colleagues on the IMR team pay their own way to participate; the $2,100 fee helps pay for supplies. He also paid his own airfare to Florida and solicited donations of medical supplies before he left. Lehmann said he’s learned to work at sites in the eastern hemisphere since it’s easier to recover from the jet lag. But sleeping on the floor of a church basement in Freeport took its toll.

“My back is killing me but I deal. I’ve gotten used to it. You get used to all of it – outdoor showers from rain water, bathrooms you don’t want to talk about.”

The work he did in the Bahamas has a lot in common with the work he does with the homeless. Working with people “at the margins – who don’t have anything,” reveals much about the human spirit, he said.

“There’s a connection on a deeply personal level that connects my brokenness to their brokenness,” he said. “You get a deep sense of the humanity of people. That is the main thing that keeps me going.”

Caption: Upstate’s David F. Lehmann, MD, PharmD, hugs “Mama Marie” in the Bahamas during a recent trip there to help patients affected by Hurricane Dorian. As the matriarch of her block, the woman helped Lehmann and his colleagues find neighbors who needed medical attention. 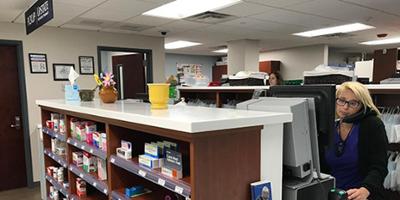 In its first year, the pharmacy has tripled its output and helped lower the... 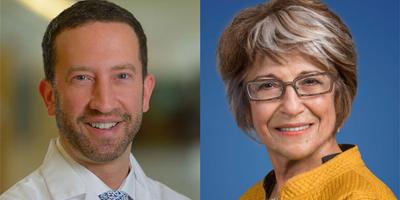 A breast surgical oncologist with an NCI-designated cancer center and leading... 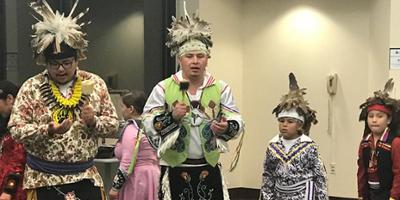 This is Upstate's second workshop for pre-med/health American Indian and Alaska... 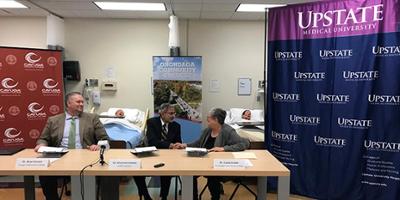 The goal is to align efforts of all three schools to foster a pipeline of...