This image shows one screen of the Predictable app on an iPad, which turns typed or written text into spoken sound.

Upstate University Hospital is about to launch its first-ever lending Voice Library of iPads to help ALS patients who have lost their ability to speak.

The iPads are equipped with an app called Predictable, which translates typed or written words, phrases and sentences into spoken language. The iPad and app will work well for patients who may have lost their ability to speak but can still use their arms and hands to type or write.

Speech and language pathologist Jenna Gardner, MS, CCC-SLP and Eufrosina Young, MD, director of Upstate’s ALS Research and Treatment Center, applied for a grant to fund the Voice Library through Upstate’s Friend in Deed program, part of the Upstate Foundation, which funds dozens of patient care programs and services each year. The $5,000 grant purchased 13 iPads, the $160 Predictable app for each device and heavy-duty cases with kickstands and handles.

The Voice Library is based in Upstate’s ALS Research and Treatment Center and available to patients being treated there. Gardner has been working with Upstate’s Information Management & Technology department to make sure the iPads work correctly for patients out in the community.

ALS, or amyotrophic lateral sclerosis, is a progressive neurodegenerative disease that can affect a person’s ability to speak, swallow, walk and move various parts of the body. The disease’s broad and wide-reaching symptoms can be expensive for patients seeking independence and normalcy, Gardner said. The lending Voice Library—a first for Upstate—can be a much-needed and welcome resource for someone who has lost his or her ability to communicate, she said.

“I find that when you lose something that makes you independent it’s hard. People can still be very social and get around in a 2powered wheelchair but when you lose your ability to communicate that’s a whole other level,” Gardner said. “A lot of times the people we see become a lot more withdrawn. If we can give them anything to help them stay more in touch with people and communicate much more efficiently with their caregivers, with their medical professionals and have that social piece to have their mental health be better, that’s a big deal.”

The iPads can connect to WiFi and will come loaded with social media, music and video apps, she said. Those tools can help ALS patients maintain relationships with family and friends.

“Among the many debilitating effects of ALS, Persons with ALS (PALS) develop weakening of throat muscles and lose their ability to speak,” Young said. “This type of technology helps avert the sense of disconnection and isolation that so often accompanies the loss of this vital function.”

The Voice Library was inspired by grateful patients Bill Prichard and Cliff Maus. Maus created the VOICE of PALS fund in 2016 through the Upstate Foundation to support the ALS clinic and research, and both men were influential in Upstate purchasing the devices to help others. The Neurology Department at Upstate hosted a luncheon in memory of Maus and Prichard last summer, announcing the Friend in Deed project to purchase the lending library of iPads.

Since purchasing the iPads in the fall, Gardner and Young have been identifying patients who will benefit from borrowing the equipment—especially useful for patients who cannot afford to buy their own or are looking to experiment with options first.

The Predictable app is a leading option for people who have lost their ability to speak. Using the app, patients may type out a word or two and the app will use predictive text to help finish the sentence. For instance, the patient may type out “I need to” and the app will offer several options to finish the sentence such as, “use the bathroom,” or “have something to eat.” Patients can add personalized and frequently used words or phrases into its library and they can choose from several languages and voice options, including British, Irish or Southern accents. There are also buttons to express emotions such as laughing, yawning or coughing.

“Patients can use this as long as they need it,” Gardner said of the Voice Library equipment. Gardner is confident all of the iPads will be loaned out soon and if demand remains high, she may seek out ways to purchase more equipment.

Caption: The 13 iPads in Upstate’s brand new Voice Library come equipped with an app called Predictable, which helps patients who have lost their ability to speak communicate. The app allows the user to type out words, phrases or sentences and then speaks the messages aloud in a variety of languages and accents. The app can also whistle, yawn, laugh or cough on command. 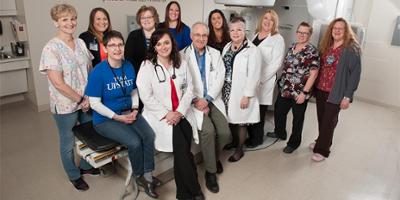 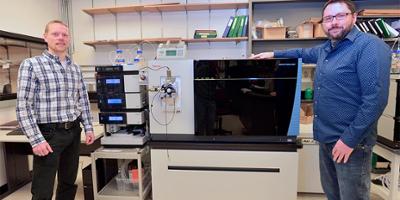 Thanks to a $1.1 million NIH grant, researchers now have access to an ultra-high... 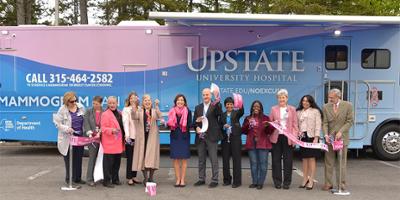 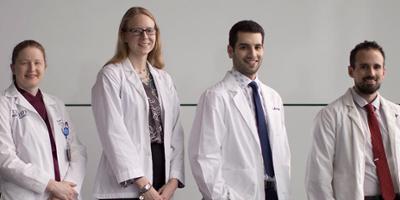 Among the graduates are four students who will earn both an MD and PhD, the...