SYRACUSE, N.Y.-- A novel way to diagnose autism spectrum disorder (ASD) in children as young as two years of age is being tested by Upstate Medical University’s Frank Middleton, PhD, and Upstate alumnus and former medical resident Steven Hicks, MD, PhD, now a faculty member at Penn State College of Medicine. The researchers work is being supported by an NIH funding awarded to Motion Intelligence Inc., a Start-Up New York company affiliated with Upstate that develops novel diagnostic technologies and has offices in Upstate’s Institute for Human Performance.

Hicks received his MD/PhD in neurosciences in 2012 and completed his residency in pediatrics at Upstate Golisano Children’s Hospital in 2015, when he and Middleton first began their work on the autism project.

The $225,000 Phase I Small Business Technology Transfer (STTR) grant to Motion Intelligence will support the on-going effort of Middleton, Hicks and Motion Intelligence as they work to develop an epigenetic autism spectrum disorder (“ASD”) diagnostic test for children aged two to six.

The CDC reports that the average age of an ASD diagnosis is 4 to 5 years of age. Yet, according to the autism advocacy organization, Autism Speaks, a reliable autism diagnosis can be made as early as 18-24 months. Evidence shows that the earlier children are identified with ASD, the sooner they are able to receive intervention services and therapies that can reduce the core symptoms of autism, improve IQ and daily functioning.

“ASD can have a profound impact on families,” says Motion Intelligence CEO Richard Uhlig. “While the cause of the disorder is unknown, early treatment of the symptoms can significantly improve the lives of affected children. Unfortunately, the first step in the process - diagnosis - is often delayed. Our consortium has developed an epigenetic test designed to facilitate the early diagnosis of ASD, thereby accelerating access to treatment.”

STTR NIH grants are intended to facilitate the translation of promising technologies to the private sector and ultimately provide beneficial healthcare innovations to consumers. Middleton sees this objective manifested in the partnership between Motion Intelligence and the two universities.

“I could not be more pleased about this strong endorsement of the highly-successful collaboration that Steve Hicks and I established with Motion Intelligence last summer to pursue follow-up studies on autism,” said Middleton, “[Motion Intelligence] is a very dynamic and forward-thinking diagnostic and device development company that has made a major investment and commitment to helping those with autism and other conditions affecting the brain.” Middleton is associate professor of neuroscience and physiology, biochemistry and molecular biology and psychiatry and behavioral sciences at Upstate. He also serves as director of the SUNY Upstate Molecular Analysis Core Facility,

“This grant represents an important step in the development of a diagnostic tool which will revolutionize the way we identify and treat children with autism spectrum disorder. I am thrilled to continue working with Frank and Motion Intelligence as we advance care for children with autism,” said Hicks, assistant professor of pediatrics, Penn State College of Medicine and pediatrician, Penn State Health Milton S. Hershey Medical Center.

A pilot study was initiated by Middleton and Hicks at SUNY Upstate evaluating 45 children ages 4 to 13 to develop a diagnostic test for ASD. The promising results of that study encouraged Motion Intelligence to seek NIH funding to further develop and confirm the efficacy of this easily administered epigenetic test.

“While our results thus far are very promising,” Carpenter notes, “further evaluation is warranted. We are grateful to the NIH and for their decision to support our research and look forward to advancing our technology.”

ASD is a medical condition that affects a person’s communication abilities and social skills, and often causes repetitive patterns of behavior and a narrow range of interests. Approximately 1 in 45 American children were diagnosed with ASD in 2014, a 10-fold increase in prevalence over the past 40 years.

Caption: Upstate Professor Frank Middleton, PhD, right, is working with Motion Intelligence, a Start-Up New York company based on the Upstate campus, on an NIH grant to develop and test an epigenic autism spectrum disorder diagnostic test. With Middleton, from left, are Rich Uhlig, founder and CEO of Motion Intelligence; and from Upstate: Brian Rieger, PhD, and Christopher Neville PhD, PT. 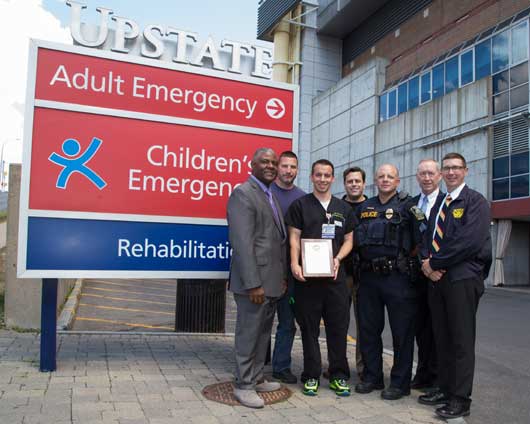 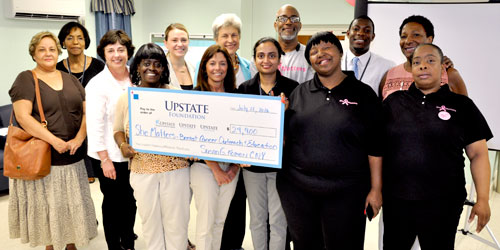 The funding supports the She Matters program, which began in 2014 and has... 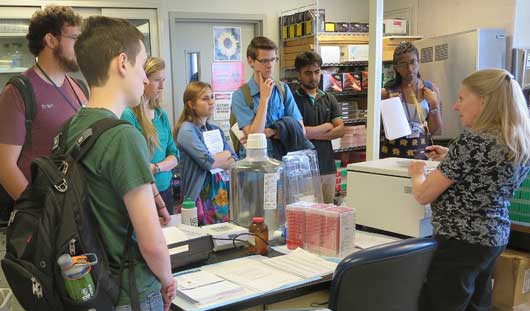 College students learn about the biomedical sciences through SURF program

Students interested in the biomedical sciences spend the summer at Upstate... 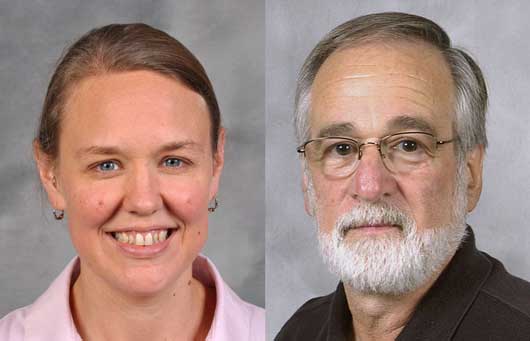 Funding is part of governor's plan to reduce annual number of HIV infections.