William Joseph Brunken, Ph.D., who has been cited by more than 1,400 authors for his research into vision disorders, has been named vice chair for research for the Department of Ophthalmology. He assumes this role in addition to serving as director of the department’s Center for Vision Research (CVR) and professor of ophthalmology, neuroscience and physiology.

In this role, Brunken is leading the research branch of the Department of Ophthalmology, which is distinguished by its team of more than 40 world-class researchers who have been awarded millions of dollars in research grants and made important breakthroughs into the causes of eye diseases.

“Upstate Medical University and its research programs, such as the CVR, are important economic engines for Central New York,” Brunken said. “I am honored to lead this world-class research group.”

Brunken added: “I look forward to capitalizing on the remarkable synergy among the vision and neuroscientists at Upstate and indeed throughout all of Central and Western New York. Our goal is to make in-roads into therapies involving stem cells, and tissue engineering.  We have partnered with colleagues in Buffalo, Albany and Brooklyn to translate our basic understanding of retinal development, structure and function into therapies to treat blinding disease.”

Brunken is an internationally recognized neuroscientist whose early work focused on the mechanisms of neural communication and had impact on our understanding the mechanisms of action of important anti-depressants - the SSRIs.  He is particularly noted for his current research that focuses on the proteins surrounding cells - the extracellular matrix - particularly laminin and laminin-related proteins. These proteins are an important set of guidance cues that direct many developmental processes and have led to insights into congenital diseases of the brain, eye and kidney.

His current research questions how the deletion of various laminins can result in disruptions in retinal vascular development. Analyses of these disruptions will contribute significantly to the understanding of how several retinal diseases develop including a devastating blinding disease of children - retinopathy of prematurity and diabetic retinopathy in adults. His work is also important in understanding the fundamental mechanisms of retinal and brain development.  Broadening his scope, he is also studying the role of laminins, and the molecules with which they interact, in various human diseases. Findings from these studies may lead to new therapies to treat the repair of neurological diseases, such as Parkinson’s and Alzheimer’s disease.

Brunken joined Upstate in March as director of the CVR. Prior to this appointment, he served as vice chair of ophthalmic research and professor of cell biology at Downstate Medical Center. He brings a wealth of university experience to Upstate Medical University having served on the faculties of Boston College (Biology); Harvard University and Massachusetts General Hospital (Dermatology) and Tufts University (Cell Biology and Ophthalmology).

Caption: William Joseph Brunken, Ph.D., is named vice chair for research for the Department of Ophthalmology and director of the department’s Center for Vision Research.

The Whitney's $50,000 gift is the largest contribution received by the College... 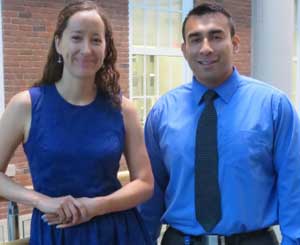 Students put their efforts behind projects to improve lives in central New York,... 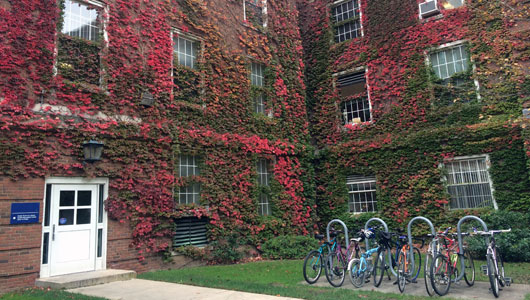 Finally, the first signs of fall color are on display at Upstate Medical...

Thirty workers were killed in the 1913 fire at the Binghamton Clothing Company....