SYRACUSE, N.Y. -- David Duggan, MD, has been appointed dean of the College of Medicine. Duggan has served as interim dean of the college since October 2011. The appointment, effective immediately, was announced by Upstate Medical University President David R. Smith, MD.

Also effective immediately, is the appointment of Rosemary Rochford, Ph.D., to vice president for research. Rochford, a member of the Upstate faculty, previously served as chair of the Department of Microbiology and Immunology. Rochford succeeds Steven Goodman, Ph.D., who has served as vice president for research and dean of the College of Graduate Studies since 2008. (Duggan will oversee the College of Graduate Studies on a temporary basis.) Goodman remains on the faculty as professor of biochemistry and molecular biology, and pediatrics.

After a national search, Smith said the best leader for the College of Medicine today can be found right here at home.

“Since being appointed interim dean in October 2011, Dr. Duggan has made great progress on strengthening the academic foundation of the College of Medicine, one that is responsive to our students and the ever-changing health care marketplace, while reflective of the exacting standards of our accrediting organizations,” Smith said.  “Additionally, Dr. Duggan brings to this position a keen awareness and understanding of the singular complexity of the challenges of being a public academic medical center in New York.”

Smith added: “But most importantly, Dr. Duggan provides us with a leader, who, as an alumnus, understands the importance of upholding the rich tradition of a solid academic medical program that is leading the way in educating physicians for our communities.”

In his nearly 30 years of service to Upstate, Duggan has held a variety of leadership roles, including chair of the Department of Medicine, where he served for 15 years, Upstate University Hospital’s quality officer and associate vice president for clinical affairs.  He also serves as professor of medicine.

An oncologist by training, Duggan is board certified in internal medicine, hematology and oncology, and has been featured regularly on the Best Doctors in America lists. In addition to his clinical and administrative roles, Duggan has been involved with cancer research and has published papers on cancer treatments.

A Syracuse native, Duggan earned a bachelor’s degree from Hamilton College in Clinton, N.Y., in 1975, and his medical degree from Upstate in 1979.

The appointment of Rochford as vice president for research elevates one of Upstate’s key National Institutes of Health-funded researchers to oversee the university’s research operations. Over the past decade, Rochford has received more than $4 million in NIH funding for her studies on associated lymphomas, malaria and Epstein-Barr virus.

Rochford is a noted expert in the field of endemic Burkitt’s lymphoma, and the role the Epstein-Barr virus plays in the disease, which is the most common childhood cancer in sub-Saharan Africa. The NIH provides funding for Rochford’s research in Kenya, where she has established the Equatorial Africa Children’s Cancer Fund to help children being treated at the Nyanza Provincial Hospital. She also has developed a model to test hemolytic toxicity of anti-malaria drugs resulting in more than $1 million in funding from Medicines for Malaria Venture and Department of Defense.

“Dr. Rochford’s success as a NIH-funded researcher along with her interest and collaborative work in the area of global health will take Upstate’s research mission to the next level as we seek new initiatives aimed at sustaining and growing research funding, in both basic and clinical research,” Smith said.

Rochford joined Upstate in 2003 as an associate professor. She was named a full professor and chair of the Department of Microbiology and Immunology in 2007. Prior to joining Upstate, Rochford taught at the University of Michigan.

Rochford’s association with the NIH goes back more than a decade as an ad hoc reviewer on issues related to AIDS and cancer, pediatric cancers and infectious diseases. She serves on the editorial board of Experimental Biology and Medicine, and holds memberships in numerous associations, including the American Association for the Advancement of Science, the American Society of Tropical Medicine and Hygiene, among others.

Smith thanked Goodman for his work. “I want to acknowledge Dr. Goodman for his leadership on many of our research initiatives, both on campus and abroad,” he said. “I am pleased he remains a member of the faculty and continues his important work in the area of proteomics and sickle cell disease.” 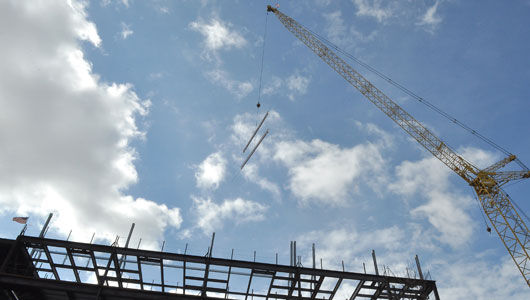 Cancer survivors told their stories in a ceremony to mark the installation of... 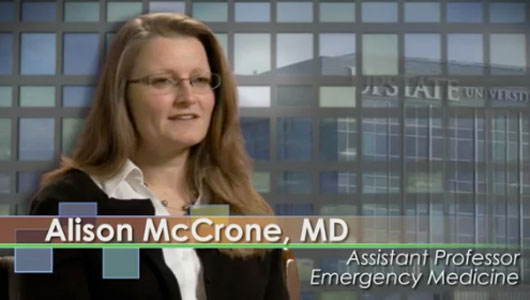 Research activity, clinical care, the opportunity to work with students and the...