“Upstate Medical University is committed to becoming a leader within SUNY and the region on matters related to sustainability, including enhancing our conservation efforts and reducing energy costs and our carbon footprint,” said Upstate Medical University President David R. Smith, MD. “Working together with New York state, we are making good on this commitment. Being good stewards of our environment reflects our overall mission to improve the health of the communities we serve.”

NYSERDA awarded $335,000 to Upstate for energy efficiency measures that are projected to reduce electricity use by more than 1 million kilowatt hours annually, the equivalent of powering 104 homes and they are projected to reduce carbon dioxide emissions by more than 1,250 tons annually, the equivalent of taking 250 cars off the roads.

--Renovations and new construction of the Upstate Cancer Center. “Curtain-walls” will be built to allow natural light into the building’s main atrium, examination rooms and corridors. Controls will be used in these spaces to dim artificial light in response to available natural light;

--Expansion of the Institute of Human Performance;

--Construction of the Central New York Biotech Accelerator; and

NYSERDA-funded energy efficiency projects for new construction at Upstate are projected to be 10 to 39 percent more energy efficient than the state’s energy code requires, depending on the building.
Energy-efficiency measures in the various buildings include insulation; high-efficiency air conditioners, boilers, motors and pumps; air handling units and chillers. Also, a heat exchanger to heat water by circulating existing campus steam by hot water pumps; fans with variable-speed drives to modulate airflow in response to static pressure in ducts; and high-efficiency lighting and lighting controls, including occupancy sensors to turn lights off when no one is in the space and daylight dimming to reduce the use of artificial light.

Funding for these projects is through NYSERDA’s New Construction Program, which provides technical support to design teams and financial incentives to building owners involved in the construction of new or substantially renovated structures in New York State.

Caption: The Central New York Biotech Accelerator is one of several Upstate Medical University projects that has benefited from New York State Energy Research and Development Authority grant program, through the installation of energy-effcient lighting, heating and cooling systems. The building is located at 841 East Fayette Street in Syracuse. 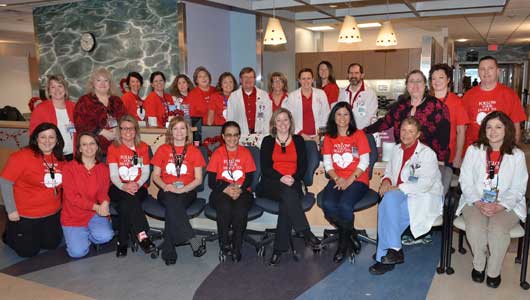 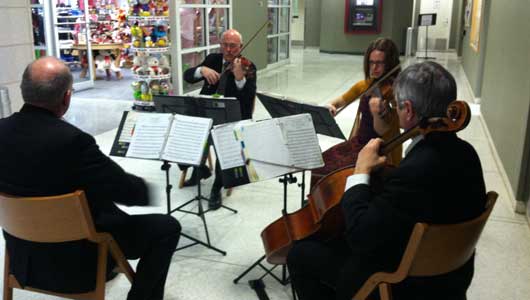 Musicians from Syracuse's new orchestra, Symphoria, play in the lobby of Upstate...

Grant will go toward increasing the number of children who can participate in...

A rare quiet moment at Golisano After Hours Care at Upstate's Community Campus.