Neurosurgeon Harish Babu, MD, PhD, is the director of minimally invasive neurosurgery and an associate professor of neurosurgery at Upstate.

Some epilepsy patients at Upstate are eligible for a unique trial using regenerative human cell therapy to control seizures. Neurosurgeon Harish Babu, MD, PhD, who administered the first dose of this treatment at Upstate, explains the trial, its goal of helping patients with uncontrolled seizures and how it is the first time this therapy has been tried in humans to treat epilepsy.

Host Amber Smith: Upstate Medical University in Syracuse, New York, invites you to be The Informed Patient, with the podcast that features experts from Central New York's only academic medical center. I'm your host, Amber Smith.

Patients from Upstate University Hospital are part of a national clinical trial of a potential new epilepsy treatment, and today I'm speaking about this with the surgeon who administered the first dose of this regenerative human cell therapy. His name is Dr. Harish Babu, and he's an assistant professor of neurosurgery.

Welcome back to "The Informed Patient," Dr. Babu.

Harish Babu, MD, PhD: Thanks for having me. Good to be back.

Host Amber Smith: This sounds so exciting. A regenerative neural cell therapy for the treatment of neurological disorders. What can you tell us about it?

Seizure is a result of an increased activation of a group of neurons in the brain, and brain cells that come in two kinds. There are excitatory neurons, which increase in activation, and there are inhibitor neurons, which sort of silence the brains. Now, we think that seizures are caused by an imbalance of this excitation and inhibition in the brain.

The hypothesis here is that if we could increase the inhibition of the area of the brain that is causing the seizures, we may be able to get seizures under control. So in this study, subjects, or patients, will undergo injection or transplantation of cells that will generate these inhibitory cells, which we call interneurons, and they secrete a sort of a chemical that silences the brain. Our hypothesis here is that if there are neurons that will increase silencing of the brain, it'll help control the seizures, if not cure the seizures.

Host Amber Smith: So, to sort of calm things down.

Harish Babu, MD, PhD: Correct. Exactly. We think that the seizures is an area of the brain that just increases the excitation and takes over the rest of the brain.

So if you could calm things down, hopefully, the seizures will calm down, and that'll help the patients.

Host Amber Smith: How unique is this therapy? Have you seen anything like this before?

Harish Babu, MD, PhD: This is indeed very unique in the epilepsy world. Similar things are tried in other diseases, but not for epilepsy.

Host Amber Smith: Well, let's give a little bit of background. Currently, what are the treatment options for adults with epilepsy, if they have epilepsy that's nonresponsive to anti-seizure medication? I'm wondering if this is a therapy that could be attempted in lieu of medications?

Host Amber Smith: Now, this being a national study, the Upstate Neurological institute is one of several sites in the United States participating. Are you still recruiting patients here in Syracuse?

Host Amber Smith: Well, who would qualify for the trial?

Host Amber Smith: So for people who are accepted into the trial, what can they expect?

And you would also undergo some psychological testing, make sure that you don't have any serious mental health disease. So you would go through a battery of tests to make sure that you are only having epilepsy, and none of the other issues are contributing to this epilepsy.

Host Amber Smith: This is Upstate's "The Informed Patient" podcast. I'm your host, Amber Smith, talking with Dr. Harish Babu. He's an assistant professor of neurosurgery at Upstate, and he's involved in a clinical trial of a potential new epilepsy treatment.

Now, will all participants receive the regenerative human cell therapy? I think it's called Neurona, right?

Correct. The name of the company is Neurona (Neurona Therpeutics). All participants in this trial will receive the same cells, from this company. How are the cells introduced into the person's brain?

Harish Babu, MD, PhD: We use a special guidance-based cannula (thin tube) that will deliver the cells, and we place the cannula in the area of the brain by using something we call a stereotaxis, which is like a GPS navigation for surgery that we use to locate precisely where we are in the brain.

So, we'll be combining these sort of very sophisticated techniques and technologies to deliver these cells precisely in the area where we would want those cells to be delivered.

Host Amber Smith: How confident are you that this therapy is safe?

Harish Babu, MD, PhD: This is the first in human studies, so currently we don't have any data for humans, but any trial like this goes through a rigorous process of studies in animals.

And we study extensively these things in animals, making sure that they are safe, and they don't grow into any cells that we don't want them to grow into, and they're doing the things that we expect them to do. Having said that, it is still animal studies right now.

The human trials are initially meant to show if this is safe, and then, what is the efficacy? And we'll only know the details of how safe this is once we do those trials, as we are doing right now, but from all the preclinical studies, those are the studies that are done in animals, we think that this is a pretty safe trial to go ahead in humans.

Host Amber Smith: Are there any precautions you would offer to someone who's considering whether they'd like to participate?

Harish Babu, MD, PhD: Those will be the checks that we will be looking for. If we think that you are a candidate for this, you would be going through a battery of tests and checks to make sure that you are safe for getting this treatment.

Those are some of the inclusion and exclusion criteria that we use for trials.

Host Amber Smith: So how long does a patient who's in this trial stay in the trial? And how often do they come for appointments, to be assessed?

Harish Babu, MD, PhD: We will be checking them routinely for two years. Having said that, if your seizures are not getting controlled after you have been given this therapy, if you think you do not want to continue, you can always drop out of it. And you'll always be given the standard of care, which is what you would have received if you did not participate in this surgery. But in this trial currently, we are evaluating patients for two years from the time they had surgery.

Host Amber Smith: What's the best way for someone to learn more. Do you have a phone number or a website to share?

Harish Babu, MD, PhD: If anybody who is interested in participating or knowing more, our Upstate Neurological Institute website (https://www.upstate.edu/neuroinstitute/about/locations.php) is a point of information. You could also contact my office, 315-492-3172, or Dr. (Robert) Beach, who is also, the principal investigator in this study, a neurologist here, his office (315-464-4243), to know more about this.

Host Amber Smith: Now, I know you had your first patient in the study at the end of June. Is it too soon to know how effective the therapy is for the subjects in the trial?

Harish Babu, MD, PhD: We had our first patient in June, and it's been about two months since that surgery. We are expecting that, once we transplant these cells, it'll take about four to five months before the cells integrate into the existing cells within the brain. And that's when the cells will be expected to act in a way that we would think it would act. So we expect that'll take about. That time, four to five months' time, before we know, to have any results of efficacy or of therapeutic benefit for this.

Host Amber Smith: These cells that come from the company called Neurona, are they created from stem cells, or where do they come from?

Harish Babu, MD, PhD: These cells are derived from stem cells. There are lines of stem cells that are used for these trials all around the world. These particular cells are derived from the stem cells and have been made, or programmed, to generate interneurons, or these inhibitory neurons. and the cells that we transplant are already so-called differentiated, or restricted to generating only these interneurons in the brain. But the starting point of this cell is a stem cell.

Host Amber Smith: Is it hard to be patient, you, as the physician, and the patient who's trying this, if you have to wait four or five months to see whether it's working? Isn't that difficult to do?

Harish Babu, MD, PhD: It is indeed. We live in a world of instant gratification, and medicine is no different. We would like to see the results of this yesterday, but we just have to be patient to know what works and what doesn't work.

So we are waiting, with our patients, to see how this pans out.

Harish Babu, MD, PhD: Levels of epilepsy care were developed by the National Association of Epilepsy Centers, and Level 4 epilepsy care, such as an epilepsy center at Upstate Medical University, provides the highest level of care to people with epilepsy and other seizure disorders.

Now in Level 4, we would perform the most complex forms of intensive neurodiagnostic monitoring. Level 4 centers also offer a complete evaluation for epilepsy surgery, and that'll include intracranial electrodes placement for knowing your seizures better, locating which part of the brain they're coming from.

At Level 4 centers, there's a broad range of surgical procedures for epilepsy that are provided for patients. It also provides for extensive medical, psychological and psychosocial treatments and support for our patients with epilepsy. The guidelines are that if your seizures have not been under control with medications after 12 months, you should request a referral to a specialized epilepsy center, such as a Level 4 epilepsy center at Upstate Medical University.

Host Amber Smith: Do you foresee offering other trials for epilepsy treatment in the future?

If there are trials that are novel that we think will benefit, or they are improvements in the current treatment modalities, we would definitely be participating in those trials, so we can provide better care for epilepsy patients in Upstate New York.

Host Amber Smith: Well, Dr. Babu, thank you so much for making time to tell us about this potential new epilepsy treatment.

Harish Babu, MD, PhD: Thank you. It's my pleasure.

Host Amber Smith: My guest has been Dr. Harish Babu, an assistant professor of neurosurgery at Upstate. "The Informed Patient" is a podcast covering health, science and medicine, brought to you by Upstate Medical University in Syracuse, New York, and produced by Jim Howe. Find our archive of previous episodes at upstate.edu/informed.

This is your host, Amber Smith, thanking you for listening. 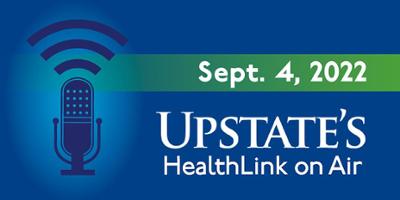 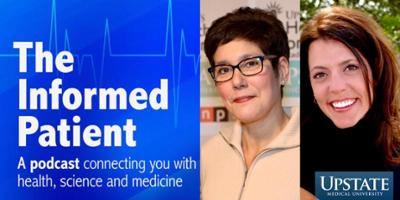 What to expect during a hospital stay

Interview with Karen Wentworth and Tina Passett from the Office of Patient... 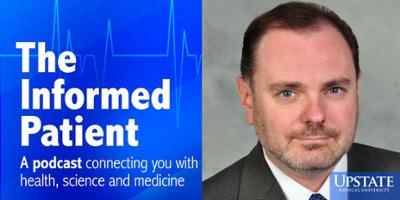 What did the pandemic teach public health experts? 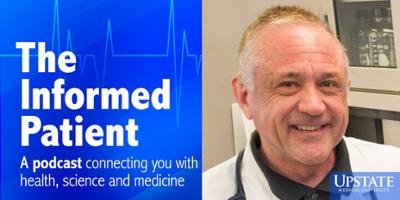