Gloria Kennedy, MD, is a pediatric oncologist at the Upstate Cancer Center.

How genetics relates to childhood cancer

Host Amber Smith: Upstate Medical University in Syracuse, New York, invites you to be The Informed Patient with the podcast that features experts from Central New York's only academic medical center. I'm your host, Amber Smith.

As scientists continue to make discoveries about genetic causes of cancer, genetic testing is being used for medical care more frequently. Today, I'm talking about this trend with a pediatric oncologist from Upstate. Dr. Gloria Kennedy is an assistant professor of pediatrics. Welcome to "The Informed Patient," Dr. Kennedy.

Gloria Kennedy, MD: Well, thanks for inviting me, Amber.

Host Amber Smith: Now, a lot of progress has been made in cancer treatment for children just during your career, but cancer still remains the second leading cause of death after accidents in children ages 1 to 14. How much have the overall survival rates for childhood cancers improved in the last few decades?

Gloria Kennedy, MD: When I started, in the early '90s, the overall survival rate for pediatric cancers was about 70%. And now it's up to 85%.

Gloria Kennedy, MD: Yeah, I think it's a significant improvement. We've seen bigger strides in certain conditions than others, but, in general, everything has gone up a little bit.

Host Amber Smith: Now of the childhood cancers, how many of them have a genetic cause?

Gloria Kennedy, MD: There are some, pediatric cancers that we know have specific genetic causes, but those tend to be few in number. An example would be retinoblastoma, which is a tumor of the back of the eye that's usually seen in very young children. We know that this runs in families and is associated with the RB1 gene, especially if it's related to multiple lesions or lesions in both eyes, then it is usually genetically caused. But for most things, we don't have a clear genetic cause of childhood cancers.

Host Amber Smith: The ones that are related to a gene, some of those are inherited from the family, the mother and the father, but some of them are acquired mutations that just spontaneously develop?

Gloria Kennedy, MD: Yes. All cancer would be from a mutation. So something has to affect the cell of origin to turn it from a normal, healthy cell into a cell that continues to grow out of control and becomes a tumor and a cancer. Sometimes there are inherited things that can make you more at risk for an additional hit, if you will, that then transforms that cell. In fact, most of the things that we think of as genetic cancers are an inherited predisposition, so an inherited, increased risk that still then would require an additional factor to turn it on and to actually cause the cancer to happen.

Host Amber Smith: And I realize we're talking about a subset of children who develop a childhood cancer, but in that subset, do parents or doctors typically know that a child has a genetic mutation that increases their risk of cancer before they're diagnosed with it?

Gloria Kennedy, MD: It depends on the family, so in some families, if the cancer has happened previously, then they might have been diagnosed. Say, for instance, retinoblastoma, that I mentioned before: There are families that know they carry that gene, and if so, the child, as soon as they're born, really can start having eye exams and monitoring for that.

In other situations, not necessarily inherited, but the child could be born with a condition that puts them at increased risk for developing a cancer. For example, neurofibromatosis Type 1, or a kind of overgrowth syndrome called Beckwith-Wiedemann syndrome, or even Down syndrome can cause an increased risk for a childhood cancer.

So those kinds of things would be known to the pediatrician, and they could inform the parent and at least be monitoring for them. Whether or not you do more intensive screening really depends on the specific condition.

Host Amber Smith: Currently when a baby is found to have cancer, is genetic testing a standard recommendation for the baby or for the siblings or the parents in that family?

But in terms of an inherited risk, that comes from the germline testing, so that would come from genetic testing on the patient's healthy cells, and that's not so standard that we do that all the time. It depends on if there's a strong family history of cancer or the specific type of tumor that the child has, whether or not we would do that germline testing.

Host Amber Smith: But the test on the tumor or the cancer cells themselves -- that will tell you as the physician, a lot of information that will guide how you recommend to treat the child, right?

Host Amber Smith: Is genetic testing advised for siblings? If you have a baby that has an inherited cancer, and I recognize those are rare, but if you do find that, does that child's sibling need to be tested as well or looked at to see whether they're at an increased risk?

Gloria Kennedy, MD: That's an interesting question. We've always kind of known that because some cancers, even if it's a small number, run in families, that siblings probably have about seven times the risk of the general pediatric population of developing a malignancy, but even seven times a very small number is still going to be a very small number.

So it's not something that we have routinely done, but again, I think in most of the situations, the most appropriate thing as we do get better and more consistent about doing germline genetic testing is to test the patient. And then if we have a positive, then we can do what they call cascade, or downstream, testing on their brothers and sisters, their parents, other family members as appropriate.

A study funded by the National Institutes of Health recently suggested that the genetic testing of the siblings of newborns who are found to have mutations in any one of 11 genes, that are most commonly associated with childhood-onset cancers, could reduce deaths from these rare cancers by about 50%. So I know we're still talking about small numbers here, but do you think testing for these 11 specific mutations would be a good idea? Just routinely?

Gloria Kennedy, MD: This NIH paper wasn't really a study. It was a modeling, so they did this very sophisticated computer modeling, saying, "What if ... ?" "What if we added these 11 cancer predisposition genes to our newborn screening that's done for some genetic conditions already?" If we added that on to the panel and their numbers calculating that they would screen 3.7 million newborns to save the lives, basically, of 15 siblings, it was very interesting how they did that.

They calculated a risk-benefit ratio using the cost of cancer care and the cost of this genetic testing added onto the newborn screen and said that it was financially a good move to do this. But they didn't really calculate into this other costs, the costs of stress on the families, of having this diagnosis, and then, the costs of taking time off from work and doing all this surveillance screening on the siblings for the potential of a cancer developing.

Because like I said, having the gene, it's not a one-to-one correlation. It's not like having the gene for sickle cell disease and knowing that you're going to have sickle cell disease. Having this genetic cancer predisposition is not the same as having it cause a cancer. And so there's a lot of worry screening, other things that would be inflicted on these families that I think is very hard to quantitate and without any definite medical benefit. To each particular family, it's hard to impose that on them. There's already just a whole ethical conundrum about doing genetic testing on children under 18 and their parents deciding for them about having that information, and so this is like taking that out to the nth degree.

Host Amber Smith: Do you think there'd be any value in testing the genes of adults who survived childhood cancer, now that genetic testing is more readily available? Would that be of any use?

Gloria Kennedy, MD: Yes, definitely. And we are offering this to our survivors. We've always known that they were at increased risk for a number of different things. Being a survivor is by no means saying that these kids are out of the woods. They're close enough to the edge that they can see the sun, but they're still in the woods. So when they finish treatment, we're surveilling them to make sure that the disease is not going to come back.

And then when we get past the time that we're worried about recurrence, we're still very focused on following them up to look at late effects, and a second malignancy is often one of the late effects that we're looking for. And these can be caused by the treatment that the children have to cure them, and it could be a second primary malignancy caused by whatever underlying conditions, whether it be genetic or lifestyle, that triggered their first cancer could cause the second cancer.

So, definitely, if we had more genetic information on our survivors, we could narrow that down and know specifically what things we need to worry about, based on whatever, if they have a genetic mutation. But for all of them, we're very focused on trying to improve their lifestyle choices, things that can help to protect them from cancer in general: diet, exercise, not smoking, using sunscreen, all of those things.

Host Amber Smith: So if someone survived cancer as a child or a young adult, how concerned should they be that their baby might develop cancer, either the same kind that they had or another one? Is that something that they need to be mindful of as they enter into parenthood?

Gloria Kennedy, MD: We used to tell survivors that there was no increased risk for their children, and a fairly large study did support this. But in reality, for each individual survivor, it really depends on whether that survivor did have a genetic predisposition that triggered their cancer in the first place, and therefore whether or not they could potentially pass it on to their child, so that's another reason to be testing the survivors, that then we could give them specific information for their situation, as opposed to just the statistics for survivors as a whole.

Host Amber Smith: Do people with a genetic predisposition to cancer, does that predispose them to some other, noncancerous diseases?

Gloria Kennedy, MD: Yes. So, depending on the particular gene mutation, they could have other tumors, non-malignant tumors, that they're at risk for and maybe ones that would require treatment, even though they're not cancer.

Host Amber Smith: In the next several years, as you look out toward the years ahead of you, what changes would you most likely expect to see regarding genetics and childhood cancer, or what would you hope for?

Gloria Kennedy, MD: Well, I think our understanding of cancer genetics is exploding right now, and the cost of even large genetic screening panels is coming down, and I think it's going to become more and more routine to do genetic testing, not only on all tumor types, but to also more frequently offer germline, or testing on the patient's healthy cells, to look for these inherited predispositions.

Host Amber Smith: My guest has been pediatric oncologist Dr. Gloria Kennedy. "The Informed Patient" is a podcast covering health, science and medicine, brought to you by Upstate Medical University in Syracuse, New York, and produced by Jim Howe. Find our archive of previous episodes at upstate.edu/informed. This is your host, Amber Smith, thanking you for listening. 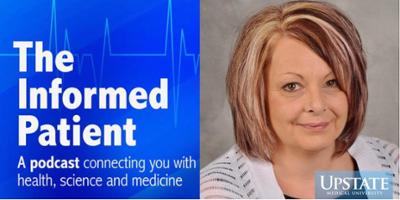 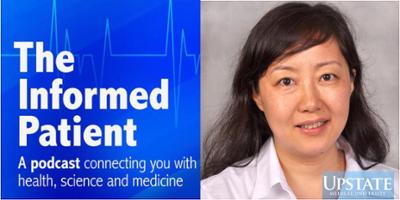 A short explanation of DNA and its role 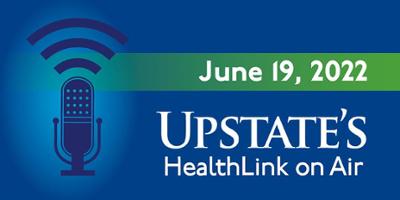 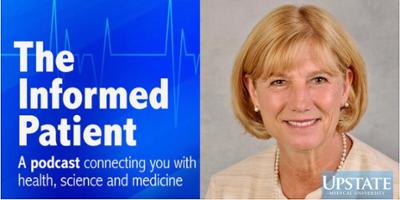