The Rev. Harold "Sandy" Sanderson, who has retired from being a chaplain at Upstate University Hospital, tells two different stories about the origin of his nickname.

Minister says he gave back by volunteering as a hospital chaplain

The Rev. Harold “Sandy” Sanderson is a Presbyterian minister who is stepping down as a member of Upstate University Hospital’s volunteer clergy after nearly 40 years of service. He explains that his volunteer role allowed him to give back to the community.
031622-sanderson-podcast.mp3 (11.58 MB)

Host Amber Smith: Upstate Medical University in Syracuse, New York invites you to be The Informed Patient with the podcast that features experts from Central New York's only academic medical center. I'm your host, Amber Smith. The Rev. Harold "Sandy" Sanderson is a Presbyterian minister who's stepping down as a member of Upstate University Hospital's volunteer clergy after nearly 40 years of service. He agreed to talk with me about what his time has been like. Rev. Sanderson, welcome to "The Informed Patient."

Rev. Harold Sanderson: Thank you, Amber. Thank you very much. I'm not sure I need any notoriety of any kind, but I'm happy to chat with you. (chuckles)

Host Amber Smith: Well, I'd love to know what drew you into spiritual care.

Rev. Harold Sanderson: Well, let's crank the clock back into the '60s. My family, among other things, had an emergency ambulance service. The calls were around the clock at various times. By the time I got to high school and college, I kind of dreaded being home over the holidays, when a lot of amateurs are on the road and shouldn't have been, and, at any rate, I'm used to the idea of expecting a call, OK? And Terry was chaplain at Crouse (Hospital) at the time ...

Rev. Harold Sanderson: Yes, the current chaplain and CPE (clinical pastoral education) supervisor. She recruited me in '82, which gets us close to the 40-year point here (chuckles). And I have retired from active ministry at this point andhave a few medical issues that, especially in the middle of winter, I have an 80-foot driveway and having to clear, so I can get onto the street, which sometimes works, and sometimes they don't bother to clear my one-block street. And, I'm very much aware of the importance of responding promptly. And, let me also say that back then, my hero was (baseball star) Sandy Koufax. (chuckles) That's where the Sandy part comes from.

Host Amber Smith: That's where your nickname comes from. OK.

Rev. Harold Sanderson: That's where the nickname comes from -- it comes from Sanderson, but that's beside the point. For me, it was Sandy Koufax, and when Terry signed me up, I was happy to help out.

And then,in order to establish a CPE program, she needed to move to Upstate University Hospital. so I've been covering them for as long as Terry has been at Upstate. On top of caring for parishes, I was also chaplain at Rosewood Heights (a former nursing home in Syracuse) for 20 years, along with a little parish on the West Side; that kept me pretty busy.

Host Amber Smith: I see. OK, and tell me, who is Sandy Koufax?

Rev. Harold Sanderson: Sandy Koufax -- I'm sorry. I forget how old I am. (chuckles) Sandy Koufax was an ace pitcher for the Dodgers. They were my heroes, the Dodgers, even though they left Brooklyn (in 1957) and moved to the West Coast, curse them for that! But yeah, Sandy Koufax is really where I get Sandy from.

Host Amber Smith: Well, when did you know that you wanted to become a minister?

Rev. Harold Sanderson: Well, in 1955, I came down with the epiglottitis, which is when your epiglottis, which is a little flap over your windpipe, gets infected, it balloons up, it completely blocks your trachea. And if you don't get a tube in there and get some air flowing into your lungs, I wouldn't be talking with you. And, along about that time I was finishing my undergraduate studies at Syracuse University, I had a dream in which I believe God kept me alive for a purpose, and it wasn't a classroom (chuckles); it was serving in the church.

So, a fairly short answer, but that's the truth. I mean, that's where it came from. And, I was very happy to have the opportunity to help the community generally, in addition to when I came back to Syracuse in 1980, I was serving the East Genesee Church, which is now the Korean Church of Syracuse. I organized them into the Presbytery and organized myself out of a job. (chuckles) And, I've stayed employed the entire time I've been in the community, which is a blessing in itself, and especially my son, who was in high school at the time, I was able to get him through high school and college.

Host Amber Smith: Do you think that your upbringing, where your family ran an ambulance service, do you think that sort of medical indoctrination drew you to hospital clergy work?

Rev. Harold Sanderson: I would say that's a factor, for sure. And, I joked that when I was serving church in Binghamton, I was in jail a lot because I was with a jail ministry, in addition to serving a parish from Binghamton, which had 800 members at the time. And, I just am not deterred, let me put it that way, by bells and whistles and tubes and things. And I've "been there, done that." And also it's a little bit of giving back, because every day I continue to breathe, I'm a thankful person.

Host Amber Smith: This is Upstate's "The Informed Patient" podcast. I'm your host, Amber Smith, talking with Rev. Sanderson, a Presbyterian minister who's volunteered his time at Upstate for almost 40 years.

Rev. Harold Sanderson: No, when I'm covering at the hospitals, denominational affiliation is not a factor.

I tell people, God doesn't care about denominations. He cares about the size of our hearts. I cover one day a month, and sometimes it's busy and sometimes not. I've also done on-call work for Hospice of Central New York.

But, it's, I think, primarily a question of people are up against it. They want somebody that's not going to take their blood or their blood pressure but wants to deal with them as a person and get their name and call them by name. And it's going to give them the strength and the courage, the healing they need. And I was happy to work on those things that are so important to me.

Host Amber Smith: I know hospital clergy may also minister to family and friends of people who are hospitalized. Do you ever get a version of the question, "Why do bad things happen to good people?"

Rev. Harold Sanderson: We call that theodicy, trying to explain things which are not explainable. I remind people that Jesus identified with the worst that can happen to a human being, nailed to a tree. He identifies with those who suffer, and through his words "My God, why hast thou forsaken me?" He knows what it means to be in trouble.

And those who are in trouble have a Savior who knows what that means, and I try to encourage people that not a sparrow holds the ground apart from God, and we're of more value than any sparrows. So, as I say, an encouragement for families as well as for the patient, that they're not alone in whatever struggles they're facing.

Host Amber Smith: You have a very calm voice. I wonder if you have a method that you follow for helping calm a tense or a chaotic situation?

Rev. Harold Sanderson: I think the key is to focus on why you're there. It's not for you. It's for me to be a support, an encouraged voice that reminds folks that we're not alone in this sometimes very dark and troubling world.

If that weren't true, I would have not stayed in organized ministry. It's not a place you make a lot of money, you know. You do it because you're thankful to God, that you can breathe, and be; that's what it's about.

Host Amber Smith: What would you say to young ministers or rabbis or priests to explain why maybe they should consider serving as volunteer hospital clergy?

Rev. Harold Sanderson: I think the key aspect is that you have more blessings. I tell people love is like a tide: It goes out, but it comes back in, and love goes out, love comes back. And often in ministry and especially in the hospital or difficult places, you find you get more blessing back than you ever offered others. It's only one day a month to fill in the calendar for Terry and others who work on this project, so that they can breathe a little bit once in a while. And, you should consider this as part of being part of the community. It's being part of the community of humanity. The important part of ministry is that not everything is in the liturgy and that a lot of it's in the practice of ministry and, reaching out to the community, and especially when people are up against it, is an important aspect of ministry. Jesus did a lot of healing in his earthly ministry. So you have a good example.

Host Amber Smith: Well, Rev. Sanderson, thank you so much for making time to talk with me.

Host Amber Smith: My guest has been Presbyterian minister the Rev. Sandy Sanderson. "The Informed Patient" is a podcast covering health, science and medicine, brought to you by Upstate Medical University in Syracuse, New York, and produced by Jim Howe. Find our archive of previous episodes at upstate.edu/informed. I'm your host, Amber Smith, thanking you for listening. 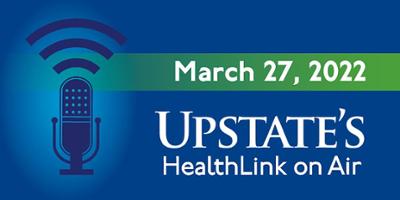 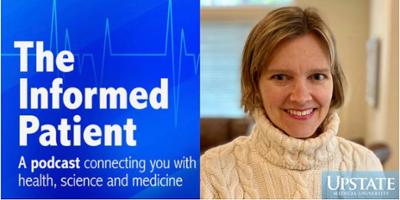 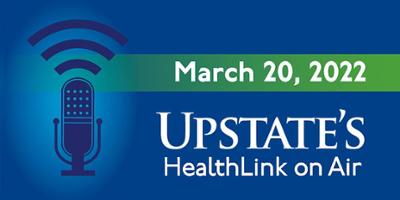 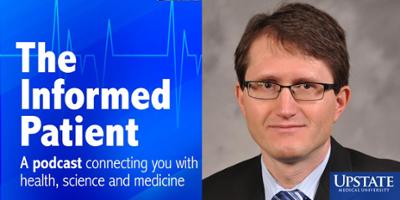 Are you getting good quality sleep?