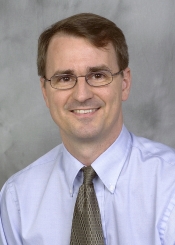 In the US alone, 10 million people are blind or suffer visual impairment due to glaucoma, retinitis pigmentosa, age-related macular degeneration and diabetic retinopathies. Every year an additional 230,000 patients loose their vision. These diseases are all due to the loss of one or more retinal cell type. Stem cells have the ability to differentiate into specialized cells. A retinal stem (RS) cell, for example, may differentiate into a rod cell, a retinal ganglion cell, or any of the five other cell types of the mature retina. Retinal stem cells are also self-renewing. These two characteristics make RS cells ideal for use in cell replacement therapies. Our laboratory studies the molecular mechanisms driving the specification, proliferation and differentiation of retinal stem and progenitor cells. How are Retinal Stem Cells Specified? The eye begins as a patch of ectodermal cells that are first patterned to form the beginnings of the anterior brain. These cells are further specified to become the retinal stem cells of the embryonic eye field. We have been investigating the genes responsible for retinal stem cell formation. We discovered that seven eye field transcription factors (EFTFs) are coordinately expressed in the anterior neural plate during retinal stem cell specification (Figure 1). Since each of these genes are required for normal eye formation, we reasoned that they might act together to specify retinal stem cells. To test this hypothesis, we coexpressed all seven genes at ectopic locations in the developing frog embryo. Remarkably, these genes were able to induce a third eye, demonstrating that they are not only expressed during, but also sufficient for eye formation (Figure 2). Is every one of the eye field transcription factors required to generate the third eye? How do these genes interact to generate an eye? What are the downstream targets of these transcription factors? What upstream regulators coordinate the expression of these genes during eye formation? These are just a few of the questions we intend to answer in this project. 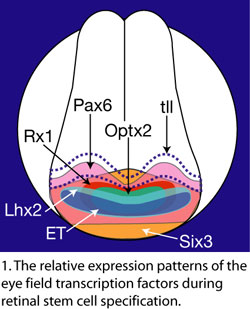 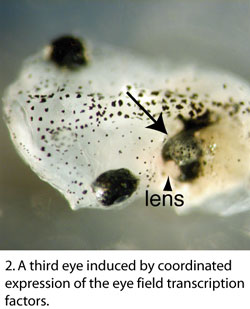