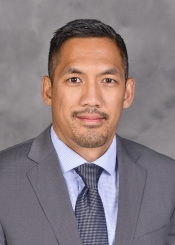 Associate Professor of Microbiology and Immunology

Human cytomegalovirus (HCMV), a betaherpesvirus, is endemic throughout the world with seropositivity reaching 50 to 80% in the United States. Although HCMV infection is generally asymptomatic in immunocompetent individuals, HCMV is a primary viral candidate in the etiology of several diseases, including atherosclerosis and glioblastoma multiforme. In immunocompromised individuals, such as neonates, AID patients, and transplant recipients, HCMV infection can lead to multiorgan failure resulting in significant morbidity and mortality. The myriad of organ diseases associated with HCMV infection is a direct pathological consequence of the systemic viral spread to and infection of multiple organ sites that occurs during either asymptomatic or symptomatic infections, which is necessary for the establishment of viral persistence within the infected host.

Currently, there are 2 main projects within the laboratory.

HCMV infection is characterized by a monocyte-associated viremia prior to the onset of viral pathogenesis, suggesting that HCMV may utilize these blood sentinels as vehicles to mediate hematogenous dissemination of the virus to several organ sites. In support, monocytes are the primary cell type infected in the blood during acute HCMV infection and are the predominant infiltrating cell type found in infected organs. However, despite monocytes being "in the right place, at the right time", these cells have a short lifespan of approximately 2 days and are not permissive for viral replication. We have recently shown that, in order to overcome this biological quandary, HCMV infection stimulates the differentiation of short-lived, viral replication non-permissive monocytes into long-lived, viral replication permissive macrophages. Currently, our laboratory focuses on the role of cellular signaling pathways, cellular miRNAs, and viral miRNAs in regulating the monocyte survival and differentiation machinery following HCMV infection.

HCMV is considered the most significant infectious cause of post-transplant illness and death. Antiviral prophylaxis is given during high-risk transplants [(i.e. HCMV-seropositive donors (D+) to seronegative recipients (R-)] to suppress virus replication. However, current prophylaxis has simply delayed the kinetics of HCMV disease until after the antiviral regimen is completed. We believe this kinetic shift in HCMV pathogenesis is due to the inability of antiviral drugs to eliminate infiltrating infected inflammatory monocytes, which are not permissive for virus replication and the principle cell type found in infected organs of transplant patients. Thus, we advocate that suppression of HCMV replication with current prophylactic antiviral drugs must be in combination with novel drugs that can specifically kill infected monocytes. We have identified several cellular proteins, which HCMV specifically induces in order to promote the survival of infected monocytes. We are currently testing the antiviral activity of novel small-molecule inhibitors that target these HCMV-induced survival proteins in a humanized mouse model system.