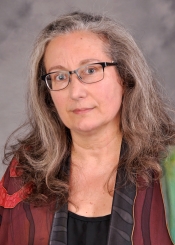 We primarily utilize the fruit fly, Drosophila melanogaster, as our model system, since it provides an incomparable platform for genetic analyses. We also work in cell culture and in yeast to investigate transcriptional regulation, cell-cell signaling and protein-protein interactions at a molecular level. Lastly, we apply functional genomics approaches to understand gene networks.

We focus on two key developmental events as our experimental models: a) the progenitor => neuron transition in the developing fly eye epithelium. This model offers an ideal setting to dissected how evolutionarily conserved factors confer proneural competence to retinal progenitor cells then drive their development into photoreceptor neurons. b) the neural versus non-neural fate choice in the early fly eye epithelium. A fundamental binary choice occurs during early development of the eye in both fly and vertebrates leading to the acquisition of neural fate (retina) and non-neural fate (support tissue) in different regions of the optic epithelium. We seek to understand how multiple factors control this process in the fly and the significance of their striking conservation of roles in vertebrate eye development.

SO/SIX-based transcriptional complexes are involved in many developmental events and control the formation of the compound eye in the fly and of the ear and eye in vertebrates. In humans, genes encoding SIX family transcription factors and one of their partner co-factors, EYA, are associated with eye and ear developmental defects that result in loss of vision or hearing. We use the fly model to understand how the diverse composition of SO/SIX-based complexes leads to functional specialization in transcriptional regulation.

We recently discovered that the fly homologue of the LMBR1L receptor, which we named Lilipod or Lili, modulates the activity of the BMP2/4 signaling pathway in ovarian stem cells. We seek to understand the molecular mechanism for Lili function in the BMP and other signaling pathways, as well as to extend our findings to LMBR1L function in the human eye.

Through an RNAi-based genetic screen, we have identified a set of genes that control the overal eye-disc morphology at a time of exponential growth and eye morphogenenesis. Analysis of the contribution of beta-Catenin to this process is currently in progress. The role of the ECM, Integrin signaling and the Mitf trascription factor will be investigated in the future.

Several manuscripts are in various stages of preparation.