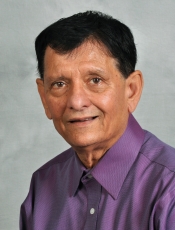 The long term goal of our laboratory is to elucidate the cellular and molecular mechanisms that regulate embryonic and post-embryonic cardiac development. The cardiac lethal mutation in the Mexican axolotl (Ambystoma mexicanum) has proven a useful tool for studying heart development in vertebrates. The naturally occurring mutation was discovered in 1968 by R. R. Humphrey in a dark stock of axolotls brought to the United States from Mexico. The cardiac non- function phenotype is a simple homozygous recessive mutation that results in failure of the affected hearts to beat. Mutant axolotl embryos are obtained from matings of heterozygous (+/c x +/c) parents, with twenty-five percent of the progeny expressing the mutant gene.

We have undertaken a detailed molecular approach to understand the mechanism of tropomyosin deficiency in mutant hearts. To date, we have identified three isoforms of tropomyosin in axolotl hearts. Of the three isoforms, two are putatively encoded by the -gene (Axolotl Tropomyosin Cardiac-1 or ATmC-1 and Axolotl Tropomyosin Cardiac-2 or ATmC-2). The third isoform referred to as ATmC-3, we believe, is encoded by a separate tropomyosin gene, most likely a TM- 4 type. Northern blotting, RT-PCR and in situ hybridization strongly suggest that ATmC-3 is expressed in embryonic but not in adult hearts. Also, it is not expressed in skeletal muscles.

This is, to the best of our knowledge, the first TM gene which is cardiac specific and developmentally regulated both positively and negatively. This concept is not in harmony with the contemporary dogma for the tropomyosin gene regulation.

In order to explain the developmentally regulated cardiac-specific expression of ATmC-3 we postulate that ATmC-3 is essential for cardiac development and for cardiac contractile activity in embryonic axolotl; the upstream regulatory region of the ATmC-3 gene contains both positive and negative regulatory cis elements which, in conjunction with the cognate factors, may contribute to its tissue-specific temporal expression. Work is in progress in these directions.

Amphibians occupy a central position in phylogeny between aquatic and terrestrial vertebrates and are widely used as model systems for studying vertebrate development. We have undertaken a comprehensive molecular approach to understand the early events related to embryonic development in the Mexican axolotl, Ambystoma mexicanum, which is an exquisite animal model for such explorations. In an attempt to identify the genes which are expressed in a stage-specific manner and can thus be used as stage-specific molecular markers, we constructed a cDNA library enriched for mRNA expressed at neurula stages 15-17 by subtractive hybridization. In vertebrate embryos the nervous system is one of the earliest tissues to form and differentiate. In amphibians the neural plates are known to be induced during the gastrula stage. The dorsal lip and the migrating dorsal mesoderm or chordamesoderm are thought to influence this induction process drastically changing gene expression in the differentiating cells. Therefore our subtracted library should be enriched for genes newly expressed for the development of neural plate and neural crest. We have isolated and sequenced a cDNA clone encoding a novel RNA-binding protein (AxRBP) from a stage15 enriched cDNA library. In vitro hybrid-arrested translation strongly suggests that it encodes a ~16 kDa protein. The binding assay with in vitro translated protein shows the specificity of its binding with RNA. In situ hybridization, Northern blot and RT-PCR analysis indicates that expression of the novel axolotl RBP transcript is developmentally regulated and is expressed primarily in embryonic neural tissues. Phylogenetic analyses reveal that axolotl RBP represents a new class of RNA-binding proteins distantly related to a recently identified RNA-binding protein in humans. We are interested in elucidating the physiological role of AxRBP in the Mexican axolotl.

Cardiac Gene Regulation During Metamorphosis of the Mexican axolotl.

We are interested in the role of thyroid hormones as regulators of gene expression in post- embryonic cardiac development; thyroid hormones are major regulators of gene transcription during amphibian metamorphosis. The adult axolotls (neotenes) reach sexual maturity without undergoing anatomical metamorphosis. Neotenes retain the characteristics of aquatic larvae, but can be induced to undergo metamorphosis when exposed to thyroxine or T3 or TSH. Our recent histological, immunohistochemical, ultra structural and molecular data strongly suggest that the heart tissues of the axolotl may undergo remodeling during spontaneous or thyroxine-induced metamorphosis. Quantitative RT-PCR analysis shows a dramatic increase in the expression of HoxA5 gene (~200 fold) only in heart tissues. However, another homeobox gene, Ahox-1 (homologue of murine HoxA1 in axolotl), remains unaffected. These results suggest some specificity of the upregulation of expression of HoxA5 by thyroxine. Our in situ hybridization results are in agreement with the RT-PCR data. Based on our findings, we have postulated the following hypotheses: (a) heart tissues undergo remodeling during metamorphosis; (b) thyroxine (or T3) directly or indirectly induces expression of HoxA5 in cardiac tissues; (c) the upregulation of HoxA5 expression is necessary for remodeling the cardiac tissues during metamorphosis. We are currently in the process of defining the parameters for thyroxine-induced remodeling of heart tissues in vivo and in vitro. Our immediate goal is to characterize the upstream regulatory region(s) of HoxA5 gene by in vitro mutagenesis followed by functional transfection assay in culture. Our ultimate goal is to evaluate the role of Hox A5, if there any, in remodeling the cardiac tissues during thyroxin-induced metamorphosis in the Mexican axolotl. It is well established that the thyroid hormones are involved in a variety of biologic mechanisms. Also, it has been long recognized that thyroid disease can lead to serious cardiac manifestations in humans. This research will be of major significance for better understanding thyroid disease in humans which is often manifested by cardiac abnormalities.

Bhatia, R., A. Gaur, L. F. Lemanski and D. K. Dube. Cloning and Sequencing of the cDNA of an RNA-binding protein from the Mexican axolotl: binding affinity of the in vitro synthesized protein. Biochem. Biophys. Acta 1398:265-274 1998.

Gaur, A., R. Bhatia, E. Spring-Mills, L. F. Lemanski and D. K. Dube. The heart of metamorphosing Mexican axolotl but not that of the cardiac mutant is associated with the upregulation of HoxA5. Biochem. Biophys. Research Commun. 245:746-751 1998.